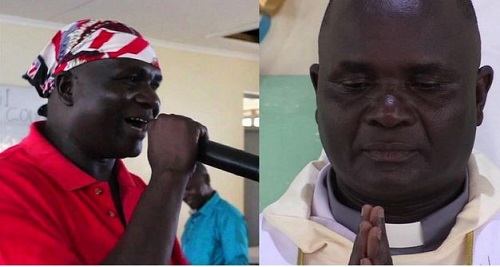 Kenyan Catholic priest, Father Paul Ogola has reportedly been suspended by the church leadership for rapping in church.

The 45-year-old priest has been using rap music to urge youth to stop using drugs and to get involved in environmental and social justice issues. He recently hit media headlines over his unique way of preaching the gospel and discouraging social vices such as drug abuse.

“I use the rap music to bring … youths to the church. Thereafter, I bring them to Christ,” Father Paul said in a recent interview with a local media.

“I want to rescue millions of youths who are leaving the Church because we are not taking care of their interests. We want to keep them in church. They can sing, rap and dance for Christ as they learn other life changing strategies.”

The Diocese of Homa Bay has now suspend the Priest for 12 months, with effect from June 3rd, 2018. Fr Charles Kochiel, the Judicial Vicar of the inter-diocesan tribunal of the Archdiocese of Kisumu said Ogola was suspended over his conduct.

“We have suspended him for a year to give him time to reconsider his ways…every institution has its own code of conduct.”

Kochiel said Fr Ogola should have consulted with the bishops “to find out if what he was doing was in accordance with the Church doctrine.”

Fr ‘Masaa’ as he is commonly referred to in Rapogi parish would shift to his rapping regalia-black shorts, a white shirt and a headband, at the end of the mass and begin his rap sessions.