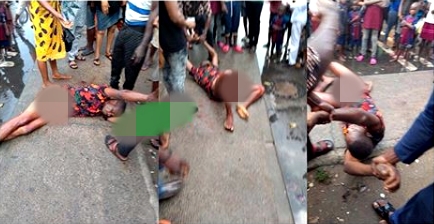 Scene of the incident

A man was captured on camera ealier today stabbing himself in apparent suicide attempt and reportedly plucked out his own intestines, in Port Harcourt, the Rivers State capital.

It was gathered that the sad incident happened at Waterlines, Port Harcourt, in the presence of his wife, daughter and other members of the public.

He was later prevented by the public from stabbing himself to death.

As at the time of filing this report, it is unknown what motivated his action, and if he was later taken to the hospital.