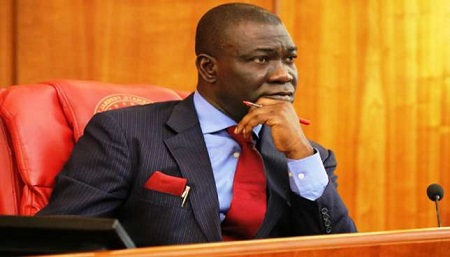 The bill is for an act to alter the provisions of the constitution to reduce the age for some political offices.

He also noted that noted that the National Assembly has delivered on its promise.

Ekweremadu, who is also the Chairman of the Senate Committee on the Review of the 1999 Constitution, on Thursday said the new amendment to the Constitution would open up the political space for the Nigerian youth.

He urged them to capitalise on it to take their proper place in the scheme of things.

He also urged President Buhari to also attend to other Constitution Amendment Bills awaiting his assent, describing them as critical to the good governance of the nation.

“I am happy for the Nigerian youth and congratulate them on this new vista of political relevance and attainments.

“We have delivered on our promise and it is my hope that the youth will capitalise on it to take their rightful place in the governance of the country. As I have always maintained, today, not tomorrow, belongs to the youth. It is theirs to organise and mobilise to take it.

“I commend President Muhammadu Buhari for assenting to the Bill to motivate our youth to start preparations for the 2019 elections.

“However, I equally urge him to assent to the remaining Bills already transmitted to him, including the Bill seeking financial autonomy for State Houses of Assembly”

He assured that the National Assembly would continue to make laws that would deepen the nation’s democracy and promote good governance.

Meanwhile, his party, the Peoples Democratic Party (PDP), has claimed credit for the bill.

The party said the bill was pursued and sponsored by members of the PDP at the National Assembly and State Houses of Assembly.

According to Mr. Kola Ologbondiyan, spokesman of the party, “this development is indeed a democratic victory for the Nigerian youths over forces.’’

“The party commands the sponsor of the bill, Hon. Tony Nwulu (PDP, Lagos) and the resilience of the Nigerians youths in getting the initiative through, in line with the vision of the PDP to allow younger Nigerians to actively participate in elective positions in governance at all levels”.