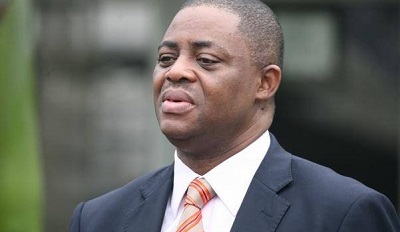 A former Aviation minister, Femi Fani-Kayode has reacted to news of the police invitation of the Senate President, Bukola Saraki, to appear before the Force in connection with investigation into the Offa bank robbery incident.

Recall that the Force Public Relations Officer, Jimoh Moshood had over the weekend, disclosed that some of the suspects arrested in connection with the Offa bank robbery, had allegedly indicted Saraki and the Kwara State Governor, Abdulfatah Ahmed.

Against this backdrop, the Police summoned the Senate President for questioning. This is happening after Saraki had claimed that the Police was plotting to frame him up in a criminal case.

Reacting to the development, the former minister stated on Twitter that Saraki is not a murderer or sponsor of armed robbers, pointing out that he has known the lawmaker for 40 years.

Fani-Kayode wrote, “I have known @bukolasaraki for 40 years and our families were close.

“I may not agree with him on many things,including his choice of pol. party,but one thing that I can say is this: he is not an armed robber or a murderer and he is not a sponsor of armed robbers and murderers.”