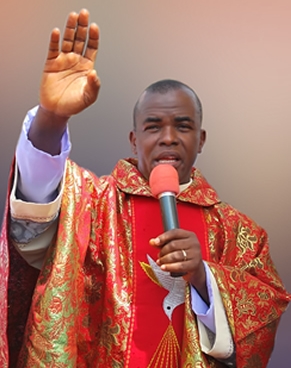 In a statement released to the press on Tuesday, the Spiritual Director, Adoration Ministry Enugu Nigeria (AMEN), Rev. Fr. Ejike Mbaka, disowned a ‘prayer chain’ circulating on social media purportedly from him.

The influential cleric described the purported ‘prayer chain’, as ‘deceptive and occult’, adding that he was not a priest in 1955, 1987 or 1993 as claimed in the social media message.

The priest said the caveat that not sending the ‘prayer’ to 20 people will bring about curses is not his way of doing things. “That prayer chain is a work of character assassins,” he said.

The Catholic priest also warned unsuspecting Nigerians to beware of fraudsters impersonating Fr. Mbaka on Facebook and other social media, soliciting seed or donation into any account for prayers or for any motherless baby home.

“My attention has been drawn to the prayer chain being spread on social media, purporting to be from me. It is claimed that the ‘prayer’ brings good luck and its original copy was from England and that anyone who receives it and sends to 20 persons without breaking the chain will have a good luck within four days of sending it out, and failing to do this will bring a curse.

“Please let the whole world know that this deceptive and occult write up is not from me. I disclaim the so-called prayer. Please stop spreading it. Was I a priest in 1955, 1987 or 1993, as they claimed that someone received this nonsensical prayer chain then?

“And to predicate the condition for the so-called ‘good luck’ on not breaking the chain of sending it to 20 persons is to propagate its rapid spread and inflict fear and curse on the minds of unsuspecting people who wouldn’t adhere to it; this has never been my kind of prayer. That prayer chain is a work of character assassins,” Fr. Mbaka said in the statement.