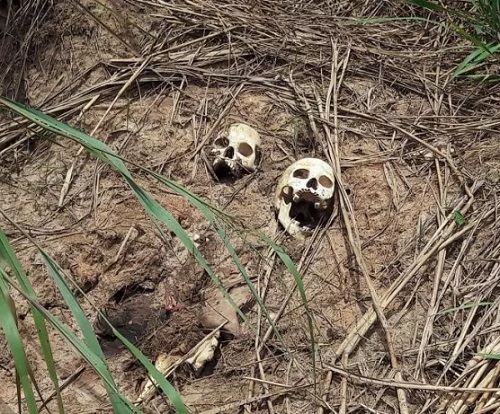 A magistrate’s court sitting in Ilorin, Kwara State, has been told how a clergy and founder of St. Moses Orimolade Cherubim and Seraphim Church, Gabriel Josiah, allegedly exhumed over 200 human skulls from Muslim Cemetery at Osere area of the state capital within seven years.

A police witness, Peter Ibiyemi, gave the details early this week in his testimony at the resumed hearing of the case which began in 2016 when Josiah, popularly called Eli-Wakuku, was arrested and arraigned. Ibiyemi, an Investigation Police Officer (IPO) who was led in evidence by a state prosecutor, Muhammad Akande, told the court that the accused allegedly made the confession in a statement obtained from him.

The IPO also explained that the accused, according to his statement, began the ‘business’ in 2009 and had so far, exhumed 200 human skulls from the Muslim Cemetery.

He further stated that the accused confessed to have perpetrated the act mainly at night, singlehandedly adding that he allegedly paid the sum of N10, 000 to the security man at the cemetery for every operation while he also allegedly confessed to have sold the skulls for N6, 000 each to a native doctor, one Gabriel Moyosore.

However, during cross examination, counsel to the accused, Taye Olojoku, argued that the statement obtained from his client was not voluntary.

The legal practitioner, who claimed to have witnessed the torture of the accused by the police, added that his client gave the statement under duress. The accused had been charged to Court in 2016 along with one Gabriel Moyosore and Yinusa Sa’ad Ayinla for alleged criminal conspiracy, criminal trespass and unlawful possession of human heads, contrary to sections 97,348,219 of penal code law.

A fourth accused, identified as Alfa Alaba Isiaka, was said to be at large. Police Prosecutor, Sergeant A. Seye, had a the first hearing told the court presided over by Magistrate (Mrs) K.A Yahaya that the information that led to the arrest of the accused was received on February 5, 2016, but that the accused had been on the job since 2009.

Part of the police First Information Report (FIR) on the case states as follows: “that you Gabriel Josaya,a.k.a Eli-wakuku, the prophet and founder of St Moses Orimolade Cherubim and Seraphim Church Osere area Ilorin conspired with you Gabriel Moyosore’m,’ Yinusa Sa’ad Ayinla, Alfa Alaba Isiaka (at large) and others unlawfully used to gained entrance into Muslim Cemetery ground Osere area Ilorin, since the year 2009 till date where some human skulls have been removed by you and sold to your various customers at the rate of eight thousand naira (N8,000.00) per skull. “You also use it for money rituals and other evil acts. You engaged in other nefarious activities within Osere area, Ilorin and its environs in the night.

“Police investigation revealed that you Gabriel Josaya actually conspired with other suspects and sold the last human skull to Gabriel Moyosore at the rate of N6, 000.00 in which the said human skull was discovered in possession of Gabriel Moyosore and you confessed to the commission of the crime. You thereby committed the above offences.”

During the initial proceeding, Gabriel Moyosore however told the court that the first accused person in the case, Pastor Gabriel Josiah, gave him the head of a chimpanzee, and not that of a human being, for the treatment of his ailing brother. Moyosore, made the declaration while testifying at the resumption of trial- within- trial of the case as he denied possession of human skulls during cross examination by his lawyer, Muhammed Aminu.

According to him the first accused person’s brother who suffered stroke was brought to him as an herbalist for traditional treatment and one of the ingredients of the medicine was Chimpanzee head which he asked him to provide. According to him, the first accused person brought the dried Chimpanzee head and he was surprised that the police arrested him for being in possession of suspected human skull.

Moyosore told the court that he could not differentiate between human skull and Chimpanzee skull especially the dried ones because they look alike. He also told the court that his confessional statement was taken under duress and was done at the Police A” Division not at the Police Headquarters, stressing that he could not write and that the statement was written for him by the police.

Earlier, the first accused person, Pastor Isaiah, had during his own cross examination told the court that the accusation against him was not true. He told the court that he was roped into the case by a friend with whom he had a car deal but which went sour and who later went to level allegation of possession of human heads against him with the police.

The Magistrate, Kehinde Yahayah, adjourned the case till August 15, 2016, for ruling on adoption of final addresses. However the case was later transferred to Magistrate Muhammed Ibrahim on the same count in 2018 where the matter came up for hearing on Tuesday. The new magistrate has adjourned the case to July 5, 2018, for a fresh trial –within- trial.