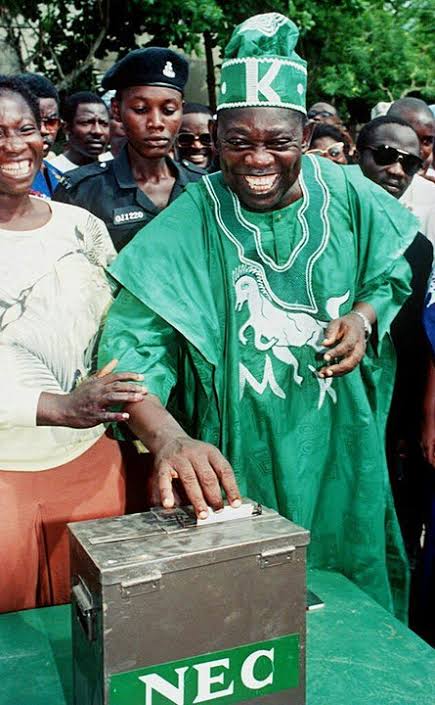 The Peoples Democratic Party, PDP have reacted to news that President Muhammadu Buhari has announced that Democracy Day would henceforth be marked on June 12 in honour of the late Chief Moshood Kashimawo Abiola. Buhari, also has declared MKO winner of the 1993 presidential elections by.

However the PDP has said the declaration by the president is a smack of hypocrisy and political desperation ahead of 2019 presidential election. In a series of tweets via their Twitter handle on Wednesday night, the PDP noted that there was no historical record to show that “Buhari was sympathetic to the Abiola family, when his wife, Kudirat, was gruesomely murdered by the agents of a government which President Buhari served”.

The national honour proposed to be conferred on the acclaimed winner of June 12, 1993, Chief MKO Abiola, by the failed President Muhammadu @MBuhari, smacks of hypocrisy and political desperation ahead of 2019 presidential election. @OfficialAPCNg pic.twitter.com/o9PXhByXZy

The failed President @MBuhari’s action merely sought to use the name and person of Chief Abiola to gain a political capital and not out of genuine reverence and recognition for him. pic.twitter.com/aqMltojyHa

It is also shocking that the respectable grave of Abiola can be dishonoured by granting a posthumous award on him along with someone who denounced the June 12 mandate and preferred the company of his (Abiola's) traducers. pic.twitter.com/ggx00kh9S6

Honouring MKO Abiola and June 12 is long overdue and a welcome development but it is only in line with the pretentious nature of Buhari and the APC.

Any person who is deceived with this was deceived long before this: the gift is accepted but the giver is a fraud and rejected.