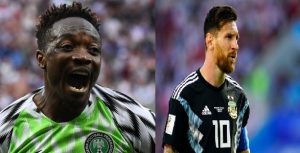 Vice president Yemi Osinbajo took to social media on Tuesday to wish the Super Eagles luck in their match against Argentina. The VP said ‘victory will be ours’ in the Tuesday match and added that ” no matter the outcome, we are proud of these young men and what they represent to us as a nation.”

Today in Ibadan, someone asked me my thoughts on the Nigeria vs Argentina game.

My response was simple.

By God's grace, victory will be ours but no matter the outcome, we are proud of these young men and what they represent to us as a nation. #TheNaijaSpirit pic.twitter.com/G43WPhfNpg

However, the Vice President’s tweet did not meet a lot Nigerians on Twitter well, as many of them were of the opinion that it was a wrong time for the VP to be talking about football considering how many Nigerians have died in the last 72 hours in Nigeria.

See how many Nigerians reacted

Wonder why the person did not ask you about the killing in Jos.

Good luck to the Super Eagles… But ur government has failed Nigerians!

You're not supposed to be watching this match Sir, you're supposed to do something about plateau

People will still be unhappy no matter the outcome because of this senseless killing acros the nation. #justicefor plateau

Leaders without conscience. You should be mourning people that died in plateau, not talking about football. Have a rethink

Blood shed is the order of the day in your country and you are just feeling unconcerned because none of your people is involve . The northern christians are being slaughtered on daily basis and our christian VP is talking about match. What a shame

Can you please talk less about the super Eagles and talk more about the killings going on in the country?

Okay Sir, that aside
Today on twitter i am asking you what have you in your capacity done to stop the multiply killings in the country aside going to console with the bereaved??