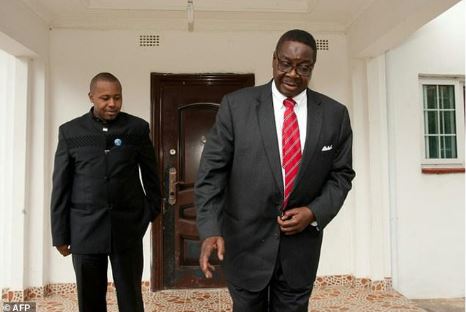 Malawi’s vice president Saulos Chilima (L) with President Peter Mutharika (R), pictured together when they were running mates in 2014. PHOTO:AFP

Mr Saulos Chilima, the vice president of Malawi has publicly attacked the corruption of the president’s government on Tuesday.

The man also announced his resignation from the ruling party, leaving the door open for a presidential run.

According to a report by the Agence France Presse, AFP, Chilima was handpicked by President Peter Mutharika to run alongside him in the 2014 elections on the Democratic People’s Party ticket. His dramatic decision to quit the DPP has exposed a widening rift in the ruling party, which has come under heavy criticism for alleged corruption.

“Despite all the sacrifices that our forefathers made, our nation remains one of the poorest. Nepotism, cronyism and corruption are rampant and only those connected continue to benefit,” he said at a media conference in Lilongwe.

Chilima’s shock move comes as calls have mounted from within the DPP for him to challenge 79-year-old Mutharika, who has ruled the country for four years.

While Chilima holds no leadership position in the ruling party, several top leaders calling themselves the “Chilima Movement” have called on the 45-year-old VP to oppose Mutharika during the party’s next conference.

Presidential elections are scheduled for 2019.

Chilima said he would “follow the procedure and leave the DPP” and also declined to rule out a run in 2019’s polls.

“I made no decision, no one contacted me,” he said, pledging to announce his decision soon.

Speculation is rife that former president Joyce Banda, who returned home in April after four years in exile following allegations of corruption, could be preparing a bid for the presidency.

Share
Facebook
Twitter
WhatsApp
Previous articleNigerian Naval officer rain curses on his ex who left him because of the long distance between them
Next articleNigeria Not Ready For World Cup After Czech Defeat
- Advertisement -Ad ==> Discover how a young Nigerian graduate now makes a consistent 40k per week doing a legitimate online business. You too can start yours now, click here!!!