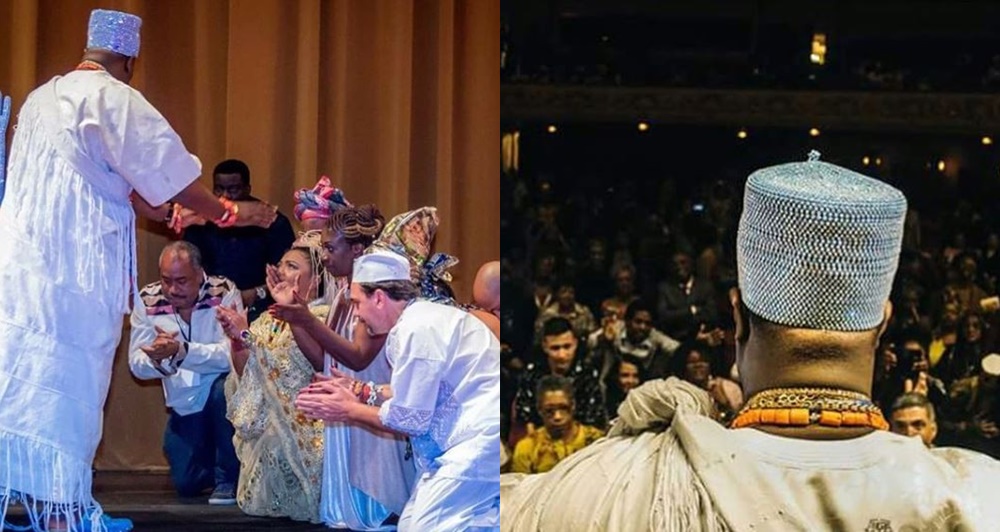 Ooni of Ife, Oba Adeyeye Ogunwusi is currently on a tour of Brazil, meeting with Brazilians to reconnect them with their African roots.

Brazil is home to the largest number of Africans outside the continent as an estimated 40 million Brazilians are actually Africans who were shipped from the west coast (West Africa) of Africa to Brazil during the Trans-Atlantic slave trade.

Oba Adeyeye Ogunwusi was photographed speaking with a cross section of indigenes who knelt to pay homage before the king!

While Catholicism is a major religion in the country many Afro Brazilians still stay true to their African belief systems and religious practices  as Ifa worship and other Yoruba traditional practices are still being adhered to.

The mantle of the Ooni Of Ife is arguably the most iconic and the most prestigious in all of Yoruba land.

Bio Of the OONI via Wikipedia

He started his elementary education at Subuola Memorial Nursery and Primary School, Ibadan and Ibadan District Council, Akobo, Ibadan. He then proceeded to the prestigious Loyola College, Ibadan and later to St. Peters Secondary School, Ile-Ife, where he bagged his secondary school leaving certificate. He graduated as an accountant from The Polytechnic, Ibadan.

The Oba is the Chancellor at the University of Nigeria, Nsukka.

Ooni Adeyeye Ogunwusi was selected from amongst several well to do indigenes of Ile-Ife who were also heirs to the throne on the 26th of October 2015. He received his staff of office on the 7th of December 2015. He has been described as an ‘astute entrepreneur driven by the need to turn impossibilities into possibilities. The Oba is the spiritual leader of the Yoruba people now saddled with the responsibility of making supplications to God and the orishas on behalf of his tribe and the world at large during annual festivals such as Olojo.

Shortly after his coronation, Ooni Ogunwusi met with the Alaafin of Oyo and by so doing initiated a new era in the history of the Yoruba States. He effectively broke the jinx of institutionalised discord between the thrones that had plagued Ile-Ife and Oyo for decades previously. The Oba is an advocate for the empowerment and emancipation of women and young people. He has transformed Ile-Ife into a tourist zone, with changes including the beautification, redesign and re-construction of the ancient city. Oba Ogunwusi is also a renowned philanthropist[3] who is committed to humanity and an advocate for the less privileged. He has granted support over the years through the House of Oduduwa Foundation and, recently, through Hopes Alive Initiative.