The Queen’s Young Leaders Awards programme, now in its fourth and final year, celebrates the achievements of some of the most exciting young change-makers from across the Commonwealth.

The Queen was joined at the Award ceremony by the Duke and Duchess of Sussex in recognizing their success.

This year’s cohort from 38 Commonwealth countries are finding solutions to global issues such as climate change, food scarcity, gender-based violence, mental health, and  access to education.

The Duke of Sussex, who was recently named a Commonwealth Youth Ambassador said: “In this rapidly changing world, it is heartening to meet so many inspiring young people gathered here today, who have already stepped up as leaders and improved the lives of so many people across the Commonwealth.

Isaac received his Award for the work he is doing to teach coding to teenagers in low-income areas, founding Teens Can Code which is currently training 200 teenagers how to build web and mobile applications using the same tools that are used by professionals in the tech industry. 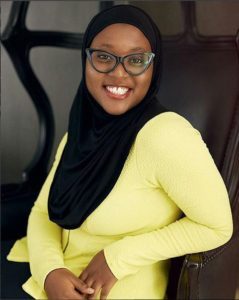 Hauwa received her award for the work she is doing to tackle the stigma around mental health, running a women’s support group called She Writes Women, which focuses on mental health support and outreach among some of the most vulnerable people in the community.

Kennedy received his Award for the work he is doing to promote women’s rights in Nigeria, founding the Calabar Youth Council for Women’s Rights (CYCWR), which supports the rights of women in the areas of female genital mutilation (FGM), domestic abuse, forced child marriage and access to education for girls.

As a Queen’s Young Leader, Hauwa, Isaac and Kennedy have gained access to bespoke mentoring and training through the University of Cambridge’s Institute of Continuing Education, designed to develop their leadership skills further and ensure they are best placed to lead the way in the future to tackle some of the world’s most pressing issues.

The now complete Queen’s Young Leaders network forms a unique, dedicated and powerful group of young people from 53 Commonwealth countries who will connect, collaborate and change lives together for years to come. To further support them in their future endeavours, a £200,000 Legacy Fund has been created. It will be open to all 240 Queen’s Young Leaders and 282 highly commended runners-up to apply for grants that will help elevate their work and enable them to work together to tackle some of the most pressing issues facing the Commonwealth.

Samuel Ortom, governor of Benue state, on Monday, revealed how he was attacked by suspected herdsmen while at his farm located along Makurdi-Naka road...
Read more
- Advertisement -