US-Based Nigerian Woman to run for Presidency under PDP 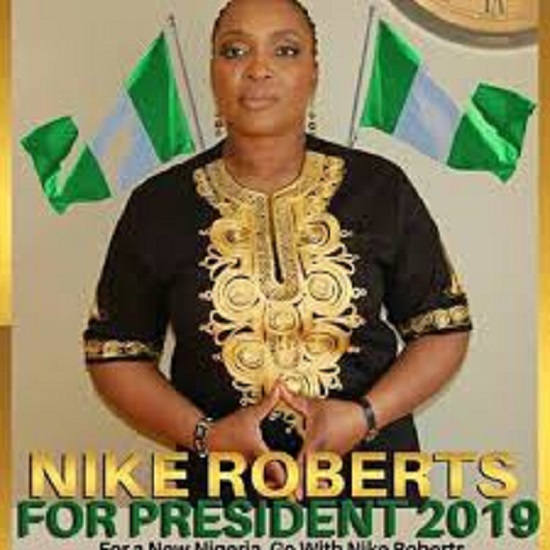 A U.S.-based Nigerian woman, Oyenike Roberts, has thrown her hat in the 2019 presidential race on the platform of the opposition Peoples Democratic Party (PDP).

She is the Vice Chair of Nigerian-American Public Affairs Committee and the President, Association of African Media Practitioners in the U.S.

Addressing her supporters in New York, Mrs Roberts vowed never to accept any donation from corrupt Nigerians to fund the campaign for her aspiration which will be built on five-cardinal plans: uninterrupted power supply, quality healthcare for all, creation of one million jobs annually, quality affordable education and security of lives and property, PTwrites.

She said despite the negative press, PDP was poised for a major shift ahead of 2019, claiming it was the party to beat and a viable platform because it had national appeal and spread.

“Our political system is driven by money and that’s why we have the kind of leadership. The system should be driven by meritocracy – what you know to do, how to do it and the will to do it.

“That’s what gave rise to the God-fatherism notion that it is who you know that gets you to the top. That system has continued for so long.

“But I’m seeing a new breed of leaders coming; a change that’s going to cause a shift in how we do politics in Nigeria. We don’t allow meritocracy to rule; we allow money to rule,” she said.

The Osun-born presidential aspirant, in her 50s, said at the centre of her heart is the security of lives and property.

“As a matter of urgency, the National Identity system must be concluded in order to account for every individual in the national database.

She said apart from creating at least one million jobs annually, there would be an urgent review of the minimum wage to living wage to match current trends as well as a relief package for the extremely poor.

She also promised to overhaul the power infrastructure and tackle the ineffective model of operations to increase power generation to at least 20,000 megawatts using renewable sources to support the fossil sources.