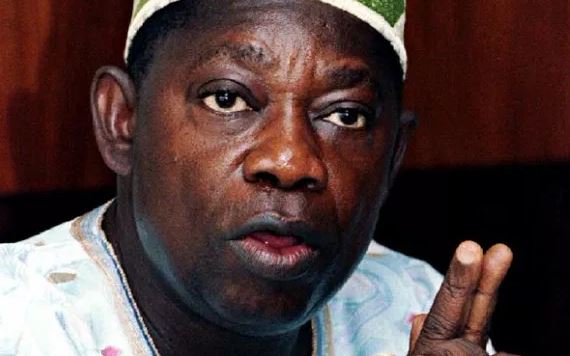 Exactly 25 years ago, a landmark election was held in Nigeria after ten long years of military rule.

There were two main contestants: Moshood Abiola of the Social Democratic Party and Bashir Tofa of the National Republican Convention.  Abiola was from the South-west: Tofa from the North-west.

Although the results of the election have never been officially certified, nevertheless, they are well known and readily-accessible.  Abiola won with 8,243,209 votes; while Tofa lost with 5,982,087 votes.

The election was annulled by the military regime of General Ibrahim Babangida. The INEC of the day was not allowed to declare the result officially.  Abiola was subsequently arrested by another usurper military ruler, Sani Abacha; and he died mysteriously while still in government detention. As a result, the country was plunged into a political crisis that took another seven years to resolve.  But even that resolution failed to address the real reason why it was felt necessary to annul the election.  The issue was patched-up in 1999 by the agreement that the next president of Nigeria must come from Abiola’s South-west. Therefore, in the election of that year, two sons of the South-west, Olusegun Obasanjo and Olu Falae contested the presidency virtually exclusively, and Obasanjo was elected president.

The present government of President Buhari has now decided to recognize the victory of M.K.O. Abiola in the 1993 election.  It has declared that henceforth Democracy Day will no longer be celebrated as a public holiday on May 29 but on June 12, the day of that 1993 election.  M.K.O. Abiola has also been awarded illegally the posthumous national honour of Grand Commander of the Federal Republic, GCFR; the highest national honour in Nigeria. However, what the government has not done, and what it will not do, is to make official the result of the 1993 election.

The 1993 election was annulled because of the results.  It was annulled because it was free and fair.  The election was annulled because a free and fair election in Nigeria is unacceptable to the powers-that-be in the North.  You need to know the reason behind this, and I will endeavour to tell you. President Babangida and his Northern cohorts had no problem with Abiola becoming the president of Nigeria in 1993.  They did not expect him to win and were surprised that he won.  But if they did not want him to be president, they would not have allowed him to be on the ballot in the first place.  What they found unacceptable was what his victory revealed.

It was in their interest to ensure that this did not come to the general knowledge of Nigerians. By still refusing to certify the 1993 election results, while getting accolades in some quarters for finally admitting officially that Abiola was the winner, the present Nigerian government is still determined that the truth revealed by the election results should not be known.  In effect, the rehabilitation of the 1993 election in Nigeria today is no more than a political gambit primarily designed to shore up lagging support for the APC in the South-west in view of the looming 2019 elections. 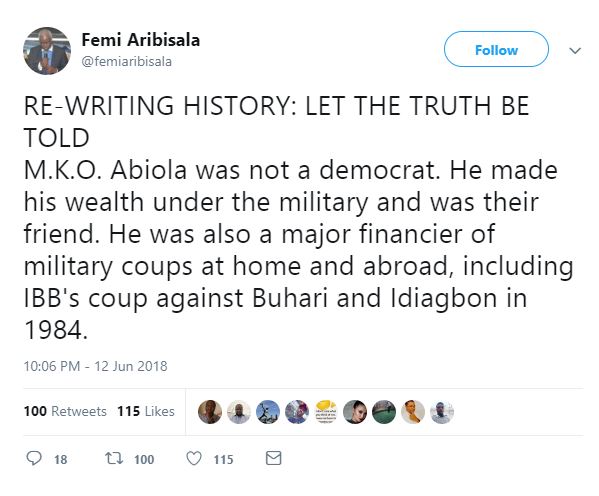 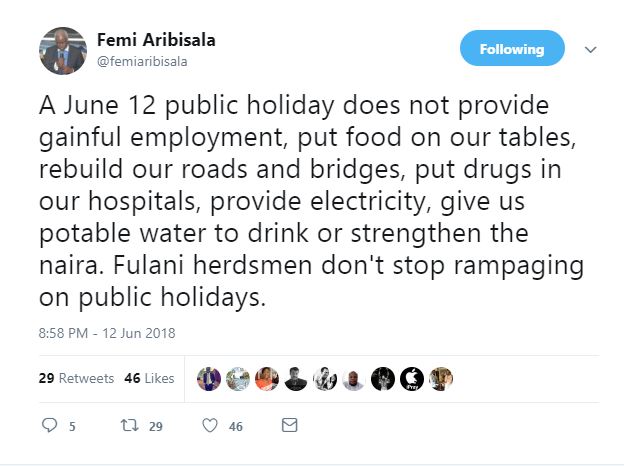 The 1993 election is widely regarded as the only free and fair election that has ever taken place in Nigeria.  Since that is the case, consider the following truths that the election results revealed. In 1993, more people voted in the South than they did in the North.  We are told time and time again that the political advantage of the North is that it is more populous than the South, and that this gives the North a certain advantage during elections.  Given the fact that in nearly 60 years, we have yet to conduct a credible census in Nigeria, there has been no way of verifying the validity of this assumption that flies in the face of logic and geography. However, the free and fair presidential election of 1993 provides us with a solid answer.  In that election, (and I repeat for emphasis, the only free and fair election ever conducted in Nigeria), with only two candidates on the ballot, one from the North and the other from the South, only 5,962,085 people voted in the North relative to 8,243,209 who voted in the South. In effect, that highly-contested election revealed what most of us always knew: there are more people in the South than in the North.  In 1993, the North only provided roughly 40% of the electorate in Nigeria, while the South provided roughly 60%.  IBB and his cohorts who decided to annul the election did not want Nigerians to know this.

Observe the following for example.  We are meant to believe today that the most populous state in the federation is Kano; thereby Kano delivers the largest number of votes in elections in Nigeria.  Against all reason and logic, it is said that Kano even has a larger population than Lagos, even though in 1991, Jigawa State was carved out of Kano.  This is simply incredible! However, in the 1993 presidential election, the only free and fair election in the history of Nigeria now validated by the Buhari administration, and with a favourite son of Kano on the ballot in the person of Bashir Tofa; Kano could only deliver 442,176 votes, less than half that of Lagos’ 1,033,397 votes.

Therefore, the 1993 presidential election results show conclusively that the large votes generally attributed to Northern states and especially Kano in Nigerian elections are fictitious.  In 2015, the presidential election between Goodluck Jonathan and Muhammadu Buhari was level-pegging until the bombshell of Kano’s result was announced.  While we were told 1,678,754 people voted in Lagos, an incredible 2,364,434 people were said to have voted in Kano.  On the basis of the 1993 template, this just cannot be true. But it did not stop there.

Another 1,153,428 votes came from Jigawa, which was carved out of old Kano.  In effect, these two states of old Kano had 3,517,862 votes, nearly 2 million votes more than that of Lagos in 2015.  And yet, Lagos is clearly the most populous state in the federation; a fact attested to by the 1993 presidential election results.  With Buhari said to have received 1,903,999 votes from Kano, more than the entire votes cast by everybody in Lagos, and another 885,988 votes from Jigawa; making a total of 2,789,987, his lead in the 2015 presidential election suddenly became unassailable. Elder Godsday Orubebe was so outraged by this disclosure, he disrupted the proceedings at the national collation centre, seized the microphone and accused the INEC chairman, Attahitu Jega, of partiality to the APC.  Although he was subsequently constrained to apologise for this infraction, his outburst is understandable in light of the outrageously padded votes awarded to the APC.

The problem here is that this fiction of outrageous votes by the states of the North-west in particular has now been locked in into the DNA of Nigerian elections.  Elections can now be won fictitiously in Nigeria by reliance on the outrageous votes of the North-west based on the 2015 template.  Jega’s gift to the North was that he laid the foundation whereby all future elections in Nigeria will henceforth be decided by inflated Northern votes; unless something drastic is done about it. When government stalwarts keep insisting today that the APC cannot lose the election in 2019, in spite of the dismal performance of the government over the last three years, you can now see what they are so confident.  Thanks to Jega, the dice has been loaded since 2015 in APC’s favour.

So, when Babangida and his Northern subalterns saw the 1993 presidential election result, they refused to declare it.  To declare it is to completely demystify the North and expose the Northern population supremacy in Nigeria as fiction. In 1993, the election result showed Kano provided less than half the votes of Lagos, with a Kano candidate on the ballot.  How then could Kano have so overtaken Lagos in population as to provide more votes for the APC by a wide margin in 2015 than the votes cast in Lagos?  In 1993, the four largest states by vote in Nigeria were all from the South.  So where did all the Northern voting juggernauts of later years, including 2015, come from? In 1993, Kano did not even provide the largest cache of votes from the North, given the fact that Jigawa was carved out of it.  Northern states like Plateau, Kebbi and Niger provided more votes than Kano.  Southern states like Rivers, Ogun, Anambra and Oyo also provided more votes than Kano in 1993.  Out of the then 30 states of 1993, Kano provided only the 14th largest number of votes.  So what accounts for the subsequent transformation of Kano as the great provider of votes for Northern candidates in Nigerian elections?

So, if the government is genuine about accepting the verdict of the 1993 presidential election result, let the government also accept the official figures of that election.  Let it reveal the results officially for the world to see.  Otherwise, how could it have reached the conclusion that Abiola won the election without the election results? The 1993 presidential election was by all accounts the best free and fair election ever in the history of Nigeria.  Except for the South-west, which voted overwhelmingly for Abiola, the election was keenly contested everywhere.

In actual fact, the annulment was an affront to all Nigerians by a Northern cabal who persist in the insistence that the will of the people of Nigeria should not be done at the polls.  The declaration of June 12 as a national public holiday and glorification of Abiola is a political gift to the South-west in this election season; otherwise the full results would also have been officially certified.  Failure to certify the 1993 result guarantees that the 2019 presidential election will also be a sham.