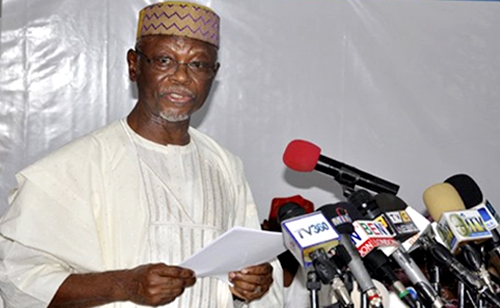 Speaking while addressing journalists in Abuja, the national chairman of the All Progressives Congress (APC), Chief John Odigie-Oyegun, on Monday, rubbished insinuations that he was intimidated into refusing to seek another term as Chairman.

Oyegun, who was earlier seeking to extend his tenure as national chairman of APC in the forthcoming national convention of the party, had last week announced his decision not to continue in the race.

The Edo state born politician said his decision not to seek re-election was influenced by his personal consideration and not due to intimidation.

He said, “I wasn’t intimidated out. I took into consideration, and I was influenced by my own consideration of what is in the best interest of the APC. I have relatively been stubborn.

“I have been through several intense opposition with some saying ‘Oyegun must go’, but I said there was no reason why Oyegun should go and I held to the point of principle and what makes me so happy today is that in all the virility or intensity of the attacks, it was easy to locate it.

“And it was easy to see that by and large, the top leadership of the party was on my side. That is something that gives me intense satisfaction.

“So, I was not intimidated out of the race, I only just thought of Oyegun being in the front or back pages of newspapers every day and being the famous whipping boy of the social media, maybe we should let somebody else bring some different air into the system, and that was all.

“It was in the interest of the party that I do not become the problem or the major part of the problem.

“As for anybody else coming in, the contest is open. The man you mentioned has indicated his interest, and it is for the delegates to decide. There is nothing to dialogue. You offer yourself for service because you think you have fresh ideas or a new sense of direction or whatever. That is legitimate.

“It does not matter where you come from. But again, if you go back to the decision of the National Executive Committee, NEC, of the party, it said to the greatest extent possible, existing zoning should be maintained; which means since the chairmanship is located in Edo State, there is a very high possibility that they will also be looking for somebody to replace him from Edo State.”