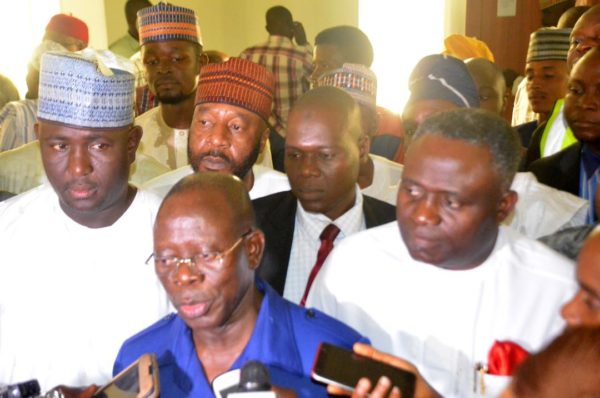 Oshiomhole APC chairman: says APC is intact and that he will not lose sleep over Buba Galadima

The National Chairman, All Progressives Congress (APC), Mr Adams Oshiomhole, on Thursday dismissed the so-called Reformed APC and its sponsors, saying reports that the party has broken up are far from the truth.

”Who are the people? I don’t know about Galadima,” Oshiomhole said when asked whether he would be the splinter group back into the APC.

Oshiomhole spoke in an interview with the newsmen shortly after a maiden meeting with the APC caucus in the House of Representatives that lasted for about three hours in Abuja.

Responding to questions, Oshiomhole disagreed that the party was in a crisis.

”There is no breakup in APC. If one Galadima of no particular political address says he is not happy, that is fine. He has the right not to be happy.

”There is no breakup in APC. If one Galadima of no particular political address says he is not happy, that is fine. He has the right not to be happy. And if he chooses to call himself what he wants to call himself, I won’t miss my sleep over that”.

The News Agency of Nigeria (NAN) reports that a rebel group in the party, the Reformed All Progressives Congress (rAPC), under the leadership of Alhaji Buba Galadima, emerged on Wednesday in Abuja.

Announcing the formation of the group at a news conference in Abuja, Galadima said the group had activated its parallel structures from the national to the ward levels.

He further stated that the new leaders at the ward levels would soon be made public.

The news conference was attended by many APC leaders, including the former National Chairman of the New Peoples Democratic Party (nPDP), Alhaji Kawu Baraje.

Oshiomhole said the party is in talks with the real stakeholders in APC.

”I mean between the executive and the two arms of the National Assembly, we have very important, influential leaders and we are engaging them.

”Now, if you have people who are being sponsored by those who thought that our convention would be a failure and they were expecting implosion.

”So they were like, what do we do next. They couldn’t stop what God has willed.

“So if thereafter, after two weeks of wriggling in pains that they were disappointed, you find mercenaries who are willing to be hired for a purpose, it is their right to be so hired,” he said.

The APC chair said the development would not cause any distraction within the core party leadership.

”Of course, I have had series of meetings with various party leaders

“ I have had meetings with governors elected on APC platform, everybody that matters in APC is here and our members just expect that with the new leadership, a couple of things will be done differently.

”And we are obviously going to do a couple of things differently because as it is said, you can be doing the same thing the same old way and expect different outcome.

“ I am convinced that there are many things that we could do differently,” he said.

According to him, although there are worries, there are also hopes.

He dismissed insinuations that the crisis might jeopardise the party’s chances in the 2019 elections.

”If people choose to be detained by fear, it is their choice. I am inspired by hope of the infinite possibilities for the future.”

On whether he intends to bring the splinter group together, Oshiomhole asked: ”Who are the people? I don’t know about Galadima.”

He said he was at the National Assembly to thank the House caucus of the party for its support at the convention.

Earlier at the meeting, the Speaker of the House of Representatives, Mr Yakubu Dogara, had said that it was only by enthroning justice and equity that the APC would be able to silence voices of dissent and opposition.

He said although there is no human endeavour that is perfect, the APC lawmakers only expected justice “which is indivisible and universal.“

“In every family, whether it is a nuclear, extended or an organisation, there is bound to be problem and that is because we humans are running those institutions are not perfect ourselves.

“ So we don’t expect perfection in from any quarters.”