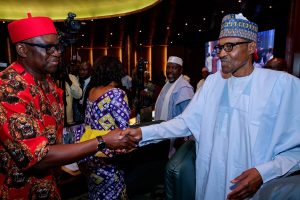 Governor Ayo Fayose of Ekiti state has asked President Muhammadu Buhari to bury his head in shame following how the 2018 Ekiti state governorship election was condcuted.

Fayose made this statement via his Twitter handle on Monday – He accused President Buhari of “using the police, army, Nigeria Security and Civil Defence Corps and INEC to snatch the mandate given to Olusola”

Fayose also noted that the winner of the gubernatorial in the state, Kayode Fayemi, whom Buhari delivered power to has been rejected by Ekiti people rejected.

On this Ekiti election, President Buhari demonstrated truly that he is not a democrat, but a dictator and fascist per excellence.

It is only Buhari that will pride himself with the security shooting sporadically at polling centres , scaring people to pave the way for the APC thugs to snatch ballot boxes.

Reacting also to the statement by the presidency, that the outcome of the just concluded polls is a reflection of how the people admire Buhari, Fayose says the referendum is a ‘big shame’.

What Buhari won as referendum from Ekiti people , Nigerians, and international community is shame, big shame.