Cristiano Ronaldo has touched down in Turin ahead of his first training session with Juventus. The Portuguese striker has been afforded an extended break following his World Cup campaign but that time off is drawing to an end. 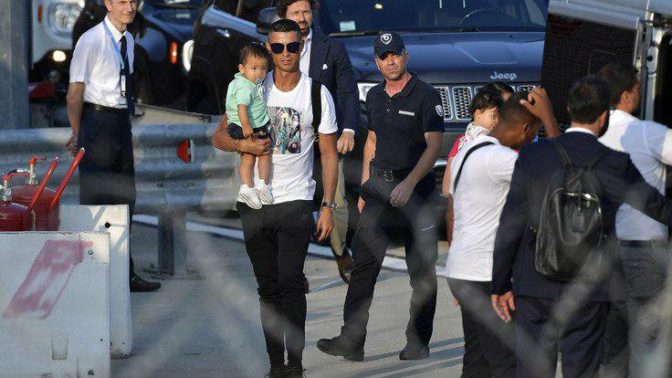 Some Juventus fans were waiting at the airport, filming with their phones as the £100m-signing disembarked.

He was seen descending the steps of a private jet with his family and a number of his entourage in tow.

Massimiliano Allegri’s side have been enjoying pre-season training on tour in the US without Ronaldo.

Ronaldo, who suffered elimination with Portugal against Uruguay in the last 16 in Russia, has since enjoyed a family holiday in addition to commercial obligations.

The 33-year-old made his annual CR7 brand tour of China with Nike as thousands gathered to catch a glimpse of the five-time Ballon d’Or winner, in addition more relaxing time with girlfriend Georgina Rodriguez.

But the former Real Madrid man will head back to the day job on Monday for the first session with his new team-mates.

His first competitive action is expected to be the Serie A opener against Chievo on August 19.