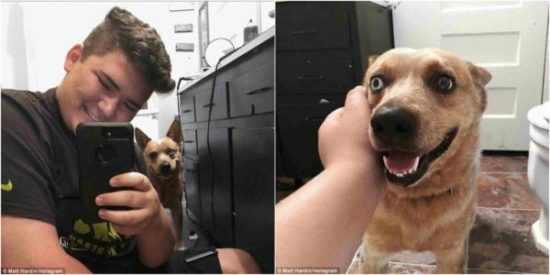 A dog has found itself becoming an instant internet sensation after it’s owner shared a clip of it ‘singing’ international pop star Britney Spears’ song, Toxic.

The video has since gone viral after the dog owner shared it on twitter and turning the dog into a sort of an internet sensation.

Matt Hardin, a teen from Arkansas, took to Twitter on Friday to share the hilarious footage of his pooch Riley unknowingly howling the song’s catchy introduction.

‘Is it just me or does Riley sound like he’s singing Toxic by Britney Spears?’ he asked, and Twitter replied with a resounding ‘yes.’

The short black and white clip, which was originally shared on Snapchat, shows Riley standing on a wooden bench while howling at the moon. Whether he knows the song or not, the dog’s cries sound just like the opening of Toxic, and people are going wild over the clip.

Is it just me or does Riley sound like he’s singing toxic by Britney Spears? pic.twitter.com/XT4us4ERYD

After the clip went viral, Matt filmed a YouTube video detailing how he captured Riley inadvertently singing the song.

He explained that he brought Riley outside with him to watch a storm that was brewing when the dog started howling, something he normally doesn’t do.

It suddenly occurred to Matt that he should film Riley because he was being so ‘adorable.’

‘I ended up capturing the Britney Spears moment that he was having,’ he said. ‘After the video had ended, I rewatched it probably about 30 times and I was like, OK this sounds oddly familiar.’