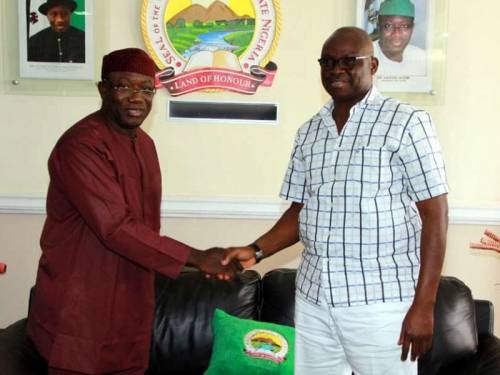 Nigerians have taken to social media to troll out going governor of Ekiti state, Ayodele Fayose after his candidate lost in the state governorship election.

John Kayode Fayemi, candidate of the All Progressives Congress, APC emerged winner in the election as he led Peoples Democratic Party, PDP candidate, Professor Olusola Eleka in 12 of the 16 local govt areas of the state, including Fayose’s Irepodun-Ifelodun Local Govt Area.

1.Voters cld have collected Fayemi's money and still voted for PDP, they chose not to!
2.Most of us don't even know the name of the PDP candidate. It looked like Fayose was running!
3.What exactly has Fayose done in Ekiti that is so spectacular to make you surprised they lost?!

The most hilarious thing about this election is that the "real" PDP candidate is not the one being trolled for his loss.

It's like the guy was not even a part of the election.

All over my TL it's Fayose that was defeated 😂😂😂

Fayose went on air to declare election results in a bid to create confusion. This silence here is loud.

Imagine it was Aregbesola or El-Rufai that made the same move.

Tailors would have been on their machines all night with long threads.

Buhari has just finished the Fayose project that GEJ started in 2014.

Fayose's pain just began today. The cry of pain three days ago was the rehearsals