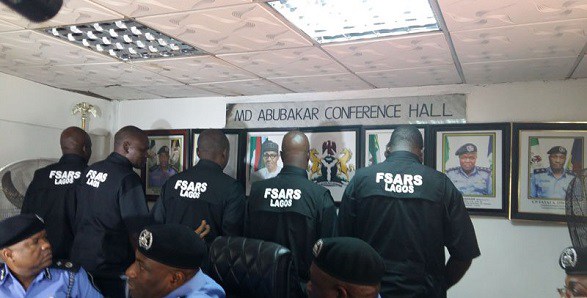 Operatives of the Special Anti Robbery Squad (SARS) yesterday attempted to implicate an ad agency owner, David, with claims that he was a ‘yahoo boy’.

David narrated his ordeal at the hands of the officials who made him miss an important meeting and allegedly attempted to extort him.

He said he was taken to Alagbon police station, near the passport office in Ikoyi, where he was made to spend the whole day without access to friends and family.

David said he couldn’t get the names of the five officials who had no uniform on and “looked like regular guys in a Benz”.

He narrated his experience after he was finally released:

I’ve been at the police station all day. I got in a taxify heading to a meeting with a client. These dudes in t shirts and jeans stop my driver. I look up from my phone and they are asking him to come out of the car.

I scan the area. No police uniforms , no squad car, no police bike, no police issued guns, one dude is wearing a GTB promo tshirt, the rest are wearing slippers and torn jeans. My mind goes to kidnappers, area boys, ritualists.

The one in a floral shirt is asking my driver to come down and the other is trying to get in the car. So I scream No!!!!! Tell the driver to wind up. Tell him to move. They block our car with a black Benz ML.

At this point I turn to them and I’m like this shit is not going to happen today. My taxify driver in fear has already opened his door. Smh. They’ve dragged the old man out. So I come out. And I start yelling at them to leave him alone.

One dude in a tshirt shows me a police ID. By this time I’m already mad. They are dragging my driver, one is getting in, the other is trying to search the car. So I threaten to call police officers I know. Screaming I’ll get you guys arrested.

These guys handcuff me and put me in their Benz. Having been kidnapped by guys claiming to be policemen in the past. I’m very weary. I literally believe I’m being kidnapped. I’m like damn, not again man. At this point they are just threatening to show me and deal with me.

Lucky for me they turn into the police station. I have never been so happy to see a Nigerian police station in my life. I’m thinking ok at least they are police officers. The rest will sort itself out.

So the lead officer starts to narrate a crazy story to his boss. How they saw me , suspected me, followed the taxify all the way from 1004 into Lekki. I’m weak at this point. This dude is claiming I’m a criminal, how i resisted arrest, I assaulted all of them.

They go through every single aspect of my phone, go through my laptop. They see my Bank of America account , my emails to clients in the US and India. They have their evidence. I’m fraudster. Statement paper appears. The guy is dictating what I should write.

I say man you must be stupid to think I’ll write what you dictate to me. At this point the taxify driver is now in the station, my own personal driver is here. They are threatening to lock both drivers up. That I’m a yahoo boy!

It just made me realize how many innocent people without my clout are in jail on false charges. These officers wanted me to write what they dictated in my statement. I was like wow!!!!!!

I hear one of them tell the other in pidgin, na legit guy na legit guy. Because he saw all my client emails on my system. The lead dude was still looking for a way to hold me down. I write the statement and tell them I own an ad agency and an investment company.

They write up a report and the senior office says they should follow me to my house. Search my whole house to find out if I own an ad agency. I look at him like he is the dumbest idiot I have ever seen.

So I ask, not my office, not the Internet, not my laptop bag, you’ve been through all my emails but you need to search my house to prove my ad agency is there. He is looking at me like dumbo at this point. I’m like do whatever you want.

They refuse to let me call my law firm. Seize my phones , my laptop, wrist watches, my hand is swollen from extra tight handcuffs. Then they take me outside and ask me to parcel cash for them. Smh. The lead guy is threatening to detain me and hang me upside down. Lol.

So I lose it and I tell him you are a fucking idiot. A corrupt slug and you are the scum of the earth. I won’t give you one fucking dime you lazy corrupt kidnapping bastard. Do your worst. At this point they are definitely not going to let me call anyone.

One starts to pacify me, that chief it’s not like that “. Starts to appeal to the naija boy. No be so chairman. By this time I’ve been in the station 4 hrs. My shoes are off, phones and laptop seized. They bring me a detention paper to scare me into dropping cash.

As soon as I see detention papers or whatever the bloody hell that was, I fucking lose it. I’m abusing and cursing everybody’s father. You are all bastards and you’ll die like bastards. When these guys realize they can’t shake me down. They tell me “we told CP you’re a fraudster.

So CP has to order your release. At this point I’ve received 50 missed calls from clients and staff. I need to get out, 5hrs has passed. They take me to CP’s office and claim some stupid shit and then say o but he’s legit and so the guy says release him. At this point O Lord.

So I’m packing up to leave and they bring a bail bond for me to pay or something stupid. Men I went off on this bastard. Called him unprintable names. At this point the whole station is pleading with me and hugging me to calm down. I just left. All day lost. Meetings not done.

How many innocent guys sit in Nigerian prisons because they didn’t bow to corrupt police officers? This bastards were dictating a statement to me. I was like” you must be bloody crazy. My heart bleeds for kids who just went about their daily lives and met the police.

Today they sit in Kirikiri awaiting trial for some crime that never existed. I ended up making some friends though. I heard heroic tales of catching criminals. So I commend some but if you’re a police officer and you’re corrupt may you meet one worse than you. Idiot.”

Nigerian citizens’ endless cries for much-needed reform of the Police Force continue to go unheeded by the government.