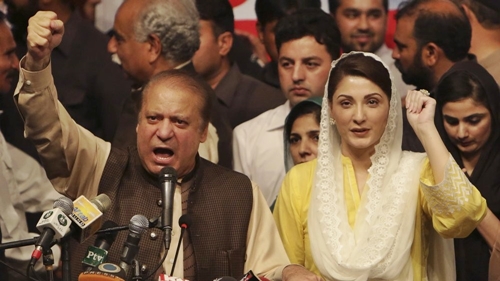 Father and daughter sentenced to 10-years and 7-years respectively

A Pakistani anti-corruption court has found former Prime Minister, Nawaz Sharif guilty of corruption and sentenced him to 10 years in prison and a $10.5m fine, a move that could be a blow to his PML-N party’s chances in an upcoming general election.

According to Al Jazeera, Judge Muhammad Bashir read the verdict before a packed courtroom in the capital Islamabad on Friday.

The case relates to the ownership of four apartments in the upmarket Park Lane neighbourhood of London, the capital of the United Kingdom.

Sharif was dismissedas prime minister last July over corruption allegations, with the Supreme Court ordering the anti-corruption watchdog to launch proceedings against him and his family.

In 2016, an International Consortium of Investigative Journalists (ICIJ) leak of 11.5 million legal documents,  dubbed the ‘Panama Papers’, showed the Sharif family had secured a $13.8m loan in 2007, using the apartments as collateral.

“Today, the anti-corruption court’s verdict has made it clear that these assets, the Avenfield apartments, were acquired through corrupt means,” prosecutor, Sardar Muzaffar Abbasi told reporters outside the courtroom.

Sharif’s daughter Maryam, also a political leader who has taken an increasingly frontline role in the party, was found to be involved in the ownership of a series of offshore companies, in whose name the properties were held.

The court also ordered that the apartments owned by Sharifs be seized and handed over to the Pakistani government. 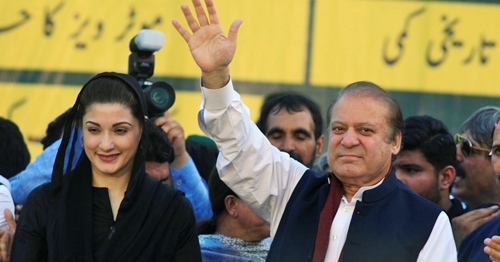 Maryam was also found guilty, and sentenced to seven years imprisonment and a $2.6m fine.

With this verdict, Maryam Nawaz now stands disqualified from standing in Pakistan’s July general election as a candidate. Her husband, Muhammad Safdar was also sentenced to one year in prison, and will stand disqualified from running the upcoming polls.

In April, the Supreme Court effectively ended Nawaz Sharif’s political career in parliament by banning him from running for public office for life.

Both father and daughter had earlier asked for a delay in the verdict, so that they may have attended the hearing in person, as they did regularly throughout proceedings.

In a tweet after the verdict, Maryam Nawaz said people stood by her father. “Well done Nawaz Sharif! You weren’t afraid, and you didn’t bow down. You gave priority to Pakistan over your own personal interests. The people stand by with you. You will be victorious.”

Both are currently in London, where they are tending to Kulsoom Nawaz, Nawaz’s wife, who is critically ill and is being treated at a hospital there.

“I am not a dictator who will run away from the courts,” Nawaz told a press conference on Wednesday, saying he would face whatever punishment the court handed down.

Verdicts in two further cases against the Sharif family are still pending.

“I am absolutely ready [to go to jail],” Maryam told reporters earlier this week. “This is not something to be afraid of.”

Separately, top Nawaz aide Fawad Hassan Fawad was arrested during an interrogation by the anti-corruption watchdog in the eastern city of Lahore on Thursday.

Nawaz and his party’s leaders have termed the corruption cases a witch-hunt, alleging the country’s powerful military wanted him out of power as he had challenged its control over aspects of security and foreign policy.

Pakistan’s military denies any involvement in politics, but has ruled Pakistan for roughly half of its 70 years since independence.

The Sharif family is expected to appeal Friday’s verdict at the Supreme Court.

‘We’ll Meet On The Field’, Bagudu Promises To Join Hunters To Track Bandits