Two suspected armed robbers have been gunned down during a bloody shootout with men of the Federal Special Anti-Robbery Squad (FSARS), in Abeokuta, Ogun state.

According to reports, the two suspects had, on Monday, July 9, 2018, besieged the Government Reserved Area, Ijebu-Ode, alongside two others, with the intent to wreck havoc and dispossess the inhabitants of their valuables.

Unknown to them that their evil intention had been blown open, while they were set to begin operation, they were challenged by crack detectives of the FSARS, which resulted in a fierce gun duel, following which two of them bowed to the superior fire power of the police.

The state Police Public Relations Officer (PPRO, DSP Abimbola Oyeyemi, in a press release made available to Crimepuzzle, stated that, the incident was botched following an intelligent report received by the state police command to the effect that the gang had arrived the area with a mission to terrorize the good people of the state. 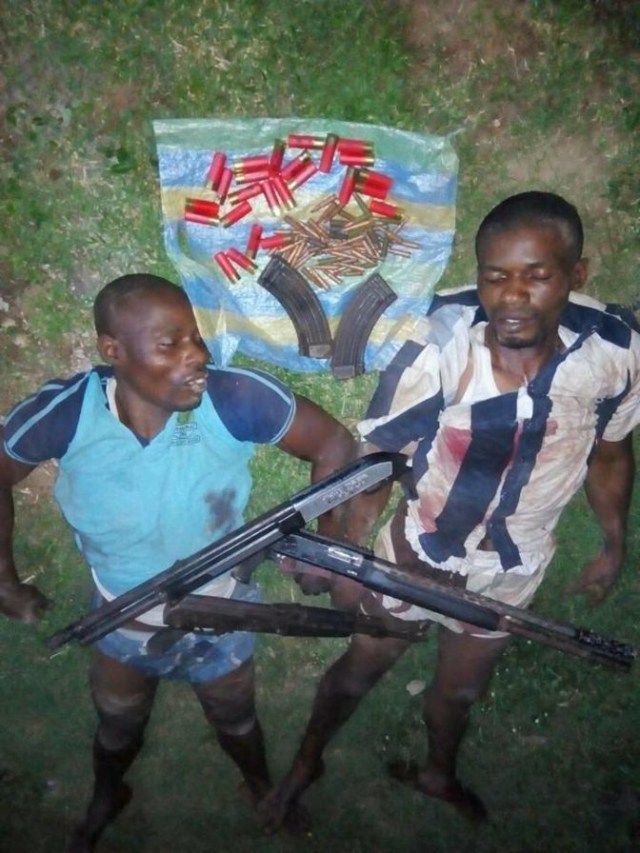 According to him, on receipt of the information, the state Commissioner of Police, Ahmed Iliyasu, gave a marching order to the Officer-in- charge of FSARS, SP Uba Adams, to go after the hoodlums and bring them to justice.

“In compliance with the CP’s order, the operatives of FSARS swung into action and accosted them in the area. On sighting the policemen, the robbers engaged them in a gun battle, which lasted for about 30minutes. At the end of the encounter, two of the robbers were shot dead while the other two escaped with bullet wound”, Oyeyemi said.

The police image maker added that one AK 47 rifle with Breach No- 804403, two pump action guns with defaced breach numbers, 57 rounds of 7.62mm live ammunition, thirty 32 rounds of live cartridges, assorted charms and unregistered Toyota Previa bus, with which they arrived the area for the operation, were recovered at the scene of the gun duel

“Meanwhile, the CP, who expressed satisfaction over the gallantry performance of his men, has ordered a serious manhunt for the escaped members of the gang. He equally appealed to hospitals as well as traditional healers to notify police if anybody with gunshot injury is seen in their area”, the statement added