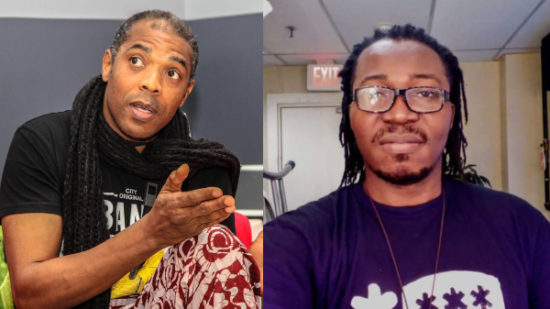 Veteran Nigerian singer, Femi Kuti, recently called out his band member for vanishing minutes before a show he headlined in United States. However in a twist of things, the band member made a counter allegation against the award winning singer saying that the singer engages in child-sex and also treats his band members badly.

My bassist Aghedo Andrew nearly ruined my concert yesterday in New York @SummerStage ,He disappeared 20mins before show time. I want to thank the rest of the band for standing strong and giving one of the best shows of the tour.

He has a good job. Paid quite well. Has enough money to resign properly and with all visas in his passport he can travel anywhere in the world. So that’s not an excuse.

The face of betrayal! Deserted Positve Force 20 mins before show in New York but he is not up to who can bring us down.

The face of betrayal. I hope @realdonaldtrump catches you and deports you!!! Deserted band 20mins before concert because he wants to stay in America

BETRAYER Absconded bassist 20 mins before concert! ANDREW AGHEDO! Those who defend you are just like you. You try to destroy other people to get on in life. It doesn’t work like that

However reacting to the call out posts, the former band member accused Femi Kuti of underpaying him and also for engaging in child-sex. He wrote:

Hey all this man is wrong and he is a liar and a lunatic. I played for this man for couple years and all he does was treated us/me like shit.He treats Hythe dancers better than us because he is fucking them. So don’t let him come here playing the victim game. I played in an album called day by day this man didn’t pay me because I left the band when I was tired. I left his band because of how i was treated and he still talk bad about me. I never use his visa to get here but this man still talk bad about everyone else but himself.

Sleeping with under age here is a crime that carried lots of prison time but am sure he knows his ways around Nigeria just like the corrupt government. Smh FYI I am an American citizen and you can’t do shit to me and you better bring my money to chicago or else you eint like what gonna happen to you. You can call the police because they are already aware of this situation about you owing me money and refusing to pay me even while you selling my hand work on iTunes and egg. So before everyone judge that poor guy that took off ask this man this question. Does he practice what he preaches? He sleeps around with all the dancers. If they don’t give it to him he won’t take them abroad but he wanna come here and talk lots of shit but before you delete this comments or block me guys call me for more info about this thieves call femi kuti +16308220816

In his reaction to the allegation, Femi Kuti wrote;

@eeflat I have NOTHING to say to him. But I will reply you. I owe him money? He can sue, I’m not running anywhere . Year his talking about I’ve been to Chicago over four times , I’m on my way there on this tour I wait.
I sleep with underage girls? He’s sick. But don’t take my word for it, he should produce one police report or case file of such a case. Parents could have made noise if you say police covered up , they could have gone public .
We NEVER employ underage persons male or female. Standard. I sleep/slept with my dancers none of his business. Tonia dances for me we’ve been together for over ten years , we have a daughter together, no secret, none of his business.
Lastly there are still members in my band that have been with me for 17years, 10years , 5/3 years minimum he should justify that.

@dinoojie he better be ready to back all he says. Me I sleep with underage girls ? I’m not him. Owe people money ?never. Treat people well? for sure. They run away then try to justify it . I’m pay badly I have proof of all salaries paid totally honest. Everyone that works for me knows what that are going to get, no surprises. Now if they don’t like their pay check they don’t have to join my band. You join then start giving flimsy excuses for y u ran, pls I didn’t spoil Nigeria.