Tunde Raphael, 24, who was last week arrested by the officials of the Rapid Response Squad of the Lagos State Police Command, has explained how he and 19 other gang members dispossessed motorists and commuters of their belongings in Mile 2 Bridge traffic. 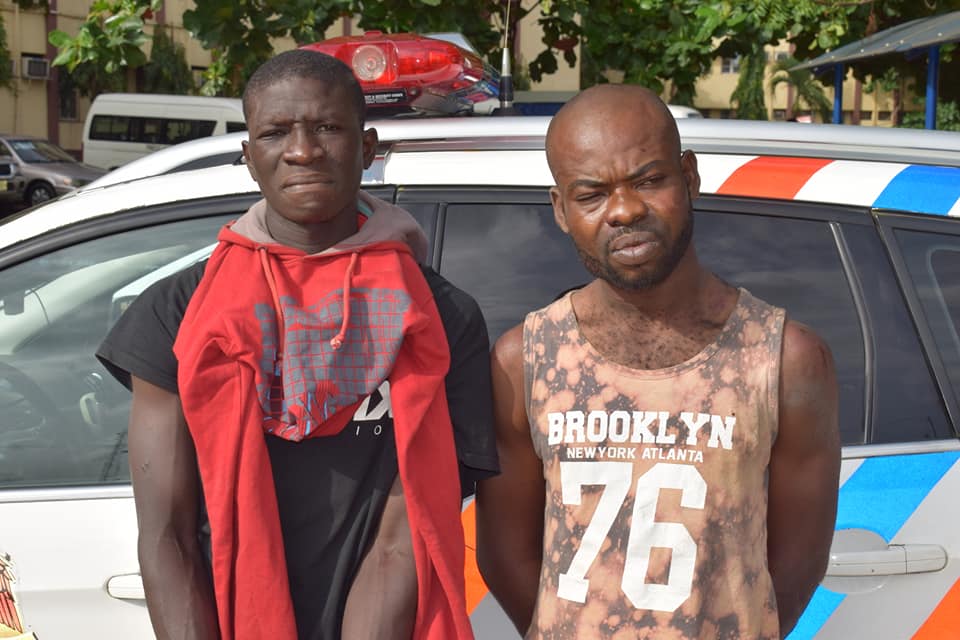 Tunde who was arrested in Mile 2 traffic at past 5:00 a.m. along with two other accomplices, Samuel Kolawole (23) and Solomon Omini (32) on Wednesday after a chase by the operatives of the Rapid Response Squad, noted that the only job he had was robbing motorists and commuters of their belongings between 4:00 a.m and 6:30 a.m as well as at night.

He disclosed that he and about 20 colleagues of his work in twos or threes holding toy guns, machetes, Jack knives, hammers, rods and other weapons to dispossess commuters of phones, money, jewellery, laptops and other prized possessions.

According to him, “it’s a job I have been doing now for more than a year. As soon as we approach a car. We tell the occupants to bring out their belongings. Some would cooperate with us and give us their phones and money.

Some would wind up. I laugh at them because we would break that glass or use our prepared mixture that when thrown at their side glasses, would bring them down gently and we would take all that we want and leave the place”.

We do this everyday. We know when to come and when not to. We work with the nature of traffic. We target passers by too. Those going to work or traders going to market are our main target. If you are old on the job, you get good targets. I sold the phones I collect for between N3,000 to N4,000 daily”.

He explained further, “recently we collected a huge money from three occupants of a vehicle. I don’t know the precise amount. We were two, my colleague tried to abscond with the money and I tried tracking him. Unfortunately for me, he noticed me and eventually matchèted me at a corner in the head.

I lost so much blood and I was there unconscious. The cut was so severe that .three hospitals rejected me. Here I am still alive. I still see this guy and he is still in this business with me.”

Tunde stated that he lost his mum at an early age. He added that he was assisting an Indian Hemp seller in Mile 2 before he was introduced into traffic robbery. He maintained that those who lured him into it assured him he was going to make more money doing that than assisting a hard drug seller, who offered him only food.

Drama however ensued during the interrogation of the suspects in RRS headquarter in Alausa when a phone, Nokia Touch, allegedly owned by one of the suspects, Samuel Kolawole, started ringing repeatedly.

Police detectives quizzing the suspect put the phone on speaker only for the caller later identified as Robert to claim the ownership of the phone, stressing that the phone was collected from him in Mile 2 by armed robbers.

Kolawole who had earlier claimed ownership of the phone in his statement said he bought the phone from a colleague of his with SIM card that morning for N1500.

The phone was later handed over to Mr Robert who reported at RRS office after calling.

Commenting on the development, Police PRO, CSP Chike Oti stated that the police are intensifying efforts towards arresting traffic robbers in Mile 2 and other parts of the state. He added that substantial progress have been made in that area.

The three suspects have been transferred to the F SARS office in Ikeja for further investigations.