An APC Mega rally held in Owerri, Imo state earlier today, and the Governor, Rochas Okorocha said the Igbos who never believed in President Buhari when he was campaigning for president in 2015, have declared to support him in 2019. President Buhari will be seeking re-election in 2019.

Speaking at the rally, Okorocha said ; 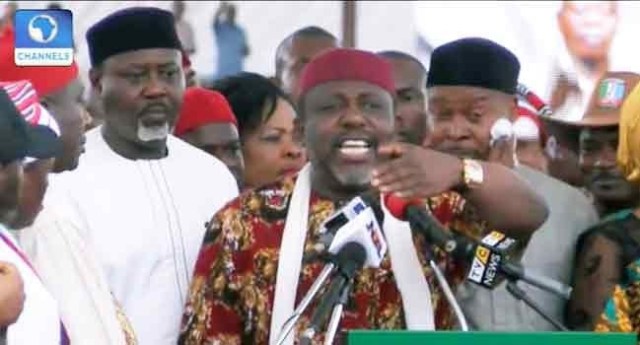 Okorocha, who is also the Chairman of the Progressives Governors Forum (PGF), used the opportunity to correct the impression that APC is not recognised in the South East.

“We also want to correct the impression that there is no APC in the South East which has led to some of our leaders in Abuja negotiating with the governors in the South East to vote for Buhari for President to gain their support in return. Ladies and gentlemen, that act can best be described in the Rochas dictionary as an act of Iberiberism. If anybody wants to support APC, it must be total. There is no partial support for APC for President and support the governor differently.” he said