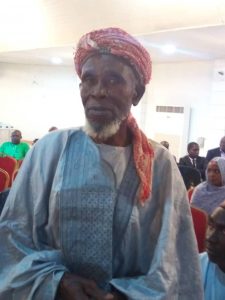 According to a report by Daily Sun, Governor Simon Lalong of Plateau State has said President Muhammadu Buhari would confer a national Honour award on the Imam of Yelwa, Gidin-Akwati, Alh. Abdullahi Abubakar, for saving over 300 children and Christian women during the recent bloody attacks that claimed several lives in the villages of Barkin-Ladi Local Government Area of the state.

Governor Lalong disclosed this, on Monday, while declaring open a three-day Peace and Security Conference, organised by the Plateau Peace Building Agency titled, ‘The resurgence of Violence in Plateau state: Towards a Multi Stakeholder Partnership for Peace and Security,’ held at Crest hotel, Jos, the state capital.

According to him, “We have discussed the positive role played by the Imam of Yelwa, Gindi-Akwati, Alhaji Abdullahi Abubakar in the recent attacks in some villages of Barkin-Ladi Local Government and how he saved 300 women and children in a community of about 1000 people. The President has asked me to bring him for a hand shake and to confer on him a National Honour Award.

“The people he saved are not only Plateau people but  they are Nigerians. We should imbibe this same spirit anywhere we found ourselves for the enthronement of enduring peace and unity in our country; this is because life is sacrosanct.”

He said the recent gory events will not discourage his administration in the pursue of peace and unity; and vowed not to give crisis merchants a breeding space in Plateau.

“I am saddened by the fact that some of the modest successes we have recorded in our collective efforts to build peace within the last three years, have been undermined by agents of destabilization and enemies of peace.

“We shall not however despair and neither shall we relent in our commitment to tackle the challenges of peace and security regardless of the evil machinations of those who have sworn to take us back to our gory past.”

Director General of Plateau Peace Building Agency, Mr. Joseph Lengmang, said the peace government and the agency had worked for in the last three years was truncated by enemies of peace during the recent attacks in the state.

Lengmang stressed that the Peace Agency would continue to work and create mutual understanding with various ethnic nationalities in the state for absolute and sustainable peace.