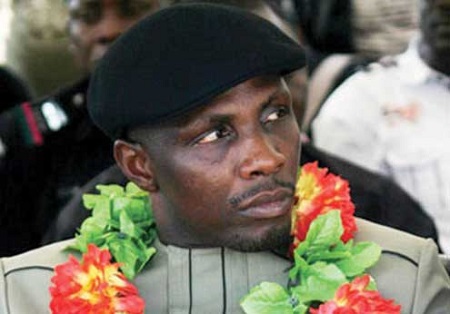 The police from the “A” Division in Warri  have nabbed a naval rating, Lance Corporal Usman Shaibu, and two others for allegedly stealing transformers from ex-freedom Fighter, High Chief Oweizide Government Ekpemupolo, a.k.a. Tompolo’s jetty, near the Chevron Clinic in Edjeba, in Warri South Local Government Area of Delta State.

The rating, alongside  a driver of a Mercedez Benz self-loader, Okugbe Lucky, and his conductor, Chime Chukwuka, were arrested at about 7pm last Sunday.

It was learnt that two other naval ratings, Staff Sergeant P O Ekon and Sergeant L S Elijah, who were allegedly involved in the criminal act, escaped and are on the run.

Shaibu, with two of his colleagues on guard duty at the jetty, was held by the police based on the allegation that they were stealing items from the yard to sell to unknown buyers.

The rating, with the connivance of his colleagues, allegedly brought in the driver and conductor with a Mercedez Benz self-loader to carry the transformer from the yard for sale.

The transformers allegedly stolen were part of the properties seized by the Federal Government two years ago.

It was gathered that the suspects had sold the equipment worth over N3 billion until they met their waterloo in Warri, Delta State.

The Commander of the Nigerian  Navy Ship,NNS Delta, Commodore, Ibrahim Dewu,  said the Navy  was trying to confirm the report.