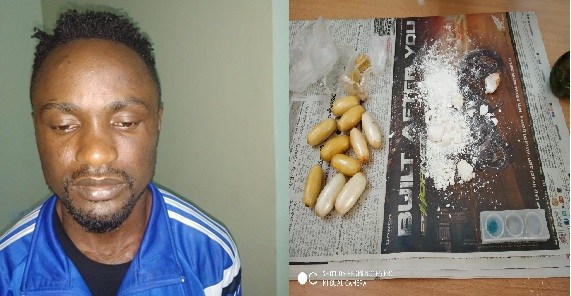 A Nigerian man has been nabbed in India after he was caught trafficking 155.5 grams of cocaine within the country.

On Wednesday, July 25, the Narcotics Control Bureau (NCB), arrested the Nigerian man with 155.5 grams of cocaine which was being transported from Mumbai to the city.

The accused identified as Ozy Chukwudu, 30, was intercepted by the NCB sleuths when he disembarked from a sleeper bus from Mumbai to Bengaluru.

With specific information of cocaine smuggling, the NCB team was waiting for his arrival from Mumbai.

Chukwudu, who did not have a passport and other documents, was carrying a polythene bag with 11 capsules which contained cocaine.

The drug was brought to Mumbai by an unidentified man hiding it in his stomach and was later handed over to Chukwudu to be brought to Bengaluru.

According to a press release by the NCB, Bengaluru, the value of the contraband is said to be around Rs 93 lakh in the international market.

“Based on examination, he was arrested under the Narcotic Drugs and Psychotropic Substances Act,” said Sunil Kumar Sinha, zonal director, NCB, Bengaluru.

He was produced before the court yesterday, Thursday, July 26.