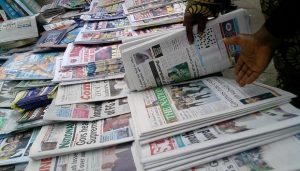 President Muhammadu Buhari yesterday urged the people of Ekiti State to vote for the All Progressives Congress (APC) in Saturday’s governorship election.

There was a heavy presence of security in Ado Ekiti on Tuesday as President Muhammadu Buhari attended the grand rally organised for the All Progressives Congress candidate in Saturday’s governorship election, Dr Kayode Fayemi.

Leadership failure, cause of killings in Nigeria —Tambuwal

Governor Aminu Tambuwal of Sokoto State has attributed the recurring killings in most parts of the country to the failure of leadership, lamenting that the harvests of deaths were not what Nigerians voted for in 2015.

We Remain One United Party under Buhari, APC Insists

The All Progressives Congress (APC) Tuesday insisted that it remained one united political party under the leadership of President Muhammadu Buhari, saying it did not recognise the reformed All Progressives Congress (rAPC), a group within its fold that signed a Memorandum of Understanding (MoU) with the Peoples Democratic Party (PDP) and 38 other opposition parties in Abuja on Monday.

Hundreds of members of the ruling All Progressives Congress (APC) in Ondo State have defected to the Advanced Democratic Congress (ADC).

Third Mainland Bridge to be closed for repairs

The Federal Controller of Works in Lagos, Mr. Adedamola Kuti, said on Tuesday that consultations had begun for the closure of the Third Mainland Bridge for repairs.

Police dock passenger for robbing Uber driver of his car

A 24-year-old man, Lucky Friday, accused of robbing an Uber driver was on Monday brought before a Magistrates’ Court sitting in Ikeja, Lagos State.

Governor Ayodele Fayose suffered a setback yesterday as several key members of his party, the PDP switched support to the APC.

Senator Philip Gyunka (PDP-Nasarawa), on Tuesday, hailed the alliance of 39 political parties ahead of 2019 general elections, saying it was “a welcome development”.

Kwara state governor,Alh Abdulfatah Ahmed has commended traditional rulers in Kwara north senatorial district for maintaining peace and harmony in the zone and the state at large.