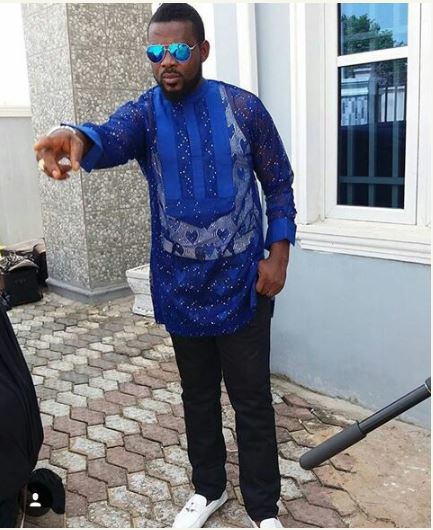 Nollywood actor, Emeka Enyiocha who recently shutdown his beer parlour, and staged a comeback to his first love-acting, after many years of staying off the stage has offered explanations for his action.

The playboy actor was spotted at the birthday party of Fidelis Duker’s wife, Temitope, which held last Sunday, at their Lekki, Lagos residence, and he was ready to share his story with anyone that cares to listen to him.

Enyiocha disappeared from the screen few years back to open a beer parlour, in Surulere, Lagos State. The beer parlour was bubbling until recently, when he decided to shut it down.

Explaining to Nollynow, why he shutdown the beer parlour, Enyiocha, who dressed in traditional Arabian garment, said, “I don’t want to work for other people to eat.”

According to him, the people he entrusted the business into the hands were mismanaging it, forcing him to close it down. He said he has no regret operating a beer parlour.

On why he disappeared from the screen, the handsome actor said he left the industry because of his family.