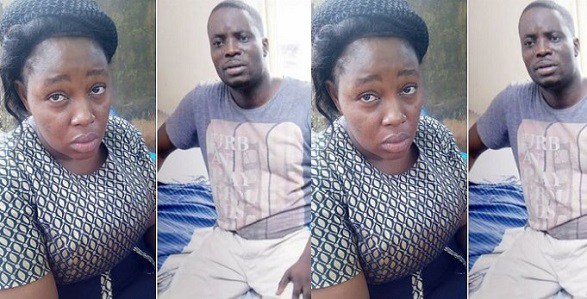 A 35 year old single mother of two has been arrested by the Federal Special Anti-Robbery Squad (FSARS) in Abeokuta for allegedly impersonating as a Medical Doctor.

With her major source of livelihood as a foodstuff trader, the suspect whose highest educational qualification was as an auxiliary nurse, allegedly fooled her neighbors in the Oluwo area of Abeokuta, the Ogun State capital, that she is a Medical Doctor attached to the Federal Medical Center (FMC), Idi-Aba, Abeokuta.

Upon interrogation, here is what she had to say;

“My name is Mercy Duru Ezinne. I am a 35-year old mother of two, living in Oluwo area, here in Abeokuta. I am into food stuff trading but trained as an auxiliary nurse in Aba. People in community take me for a medical doctor because I always go there to see some of my friends. I am also trying to see if I can further my education in their school of nursing.

“Three weeks ago, one of my neighbors, who is also my patient, introduced Mr. Hassan Olawale to me. Since I didn’t know what was wrong with him, I referred him to a laboratory where the result revealed that he has heart problem and infection.

“I told him (Hassan) to call his doctor, one Raji, who said his heart is not too bad for transplant but needs a life support machine which will cost #10million. Out of pity, I asked the doctor if there is no other way out. His response shocked me. He retorted that if I like him, I can as well give him my heart, for which I told him I can sacrifice mine for him.”

It was gathered that luck ran out of the suspect as she thereafter, collected the sum of N400,000 from the victim and “bought the drugs that are sensitive to his laboratory result, such as Rocephine Injection and drip”.

When quizzed, she said:

“Though, I am being accused of giving him Zolades Injection, which works for fibroid and hormonal health imbalances. That is untrue”.

Meanwhile, the ailing Hassan, currently in a critical condition in a private hospital within the Government Reserved Area (GRA), Ibara, also in Abeokuta, had cried out to the effect that his condition has been deteriorating ever since the suspect began to treat him since three weeks ago, adding that he had so far parted with #400,000 to her for treatment.

Mercy has consequently suggested taking Hassan before her German doctor in Accra, Ghana, and asked the family to raise money for the trip, however, the state Commissioner of Police, Iliyasu Ahmed, has ordered that the suspect be charged to court.