A commercial tricyclist (Keke NAPEP rider), Mr Abuchi Odoh and his wife, Ndidi, a trainee seamstress have been embarrassed with an overwhelming joy after the woman gave birth to quintuplets on Thursday.

Mrs Odoh, 30, was delivered of the quintuplets, four males and one female, through caesarean surgey at God’s Mercy Maternity Home, Obiuno Otolo, Nnewi, Anambra State. She said she was actually suspecting that it would not be a single birth because of how heavy she felt during the pregnancy.

Prior to the birth of the quintuplets, she had had three girls delivered in single births and a set of triplets, all boys, though two of the boys later died, one year and three months after they were delivered. 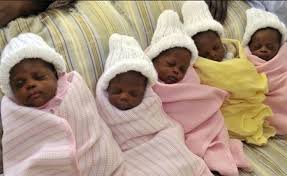 Commenting on the outcome of the latest pregnancy, the husband, Mr Odoh, said he never bargained for quintuplets as he was still battling to feed his family, given his meagre income.

When he was told that his wife had given birth to five babies, 40-year-old Odoh, a native of Okparigbovoko Nsukka in Enugu State said that he wanted to run away from the responsibility of taking care of the five babies not because he did not appreciate the blessing but because he did not know where to start from to raise money to handle the crisis.

On his feelings about the mixed blessings, he said:

“I’m a Keke NAPEP rider. The keke is my own but it is very old. I never expected that my wife would deliver quintuplets. In fact, I was expecting one baby and that was my prayer.

I don’t have means to take care of one in addition to the number we have already let alone additional five babies at a go. I’m shocked.

This is over blessing. I wanted to run away yesterday but people held me back not because I am not happy for the gift of the babies but because I have nothing to take care of them.”

The nurse who delivered the woman of the babies at the maternity, Mrs Blessing Odoemena, said when the woman went for the first scanning during the pregnancy the result showed twins, then the second scan showed triplets “but I never believed the results because I knew she was harbouring more than that.” She said she had in the past delivered the woman of all her babies and was able to know her system to some extent.

Odoemena said when the woman had three girls initially, she was troubled for not having a male child and said she continued to advise her to be patient.

“When she was delivered of the triplets of three male children I celebrated that with them and even planned to hang their picture in my office. But when two of the triplets died it was very painful to the family and me too.

I challenged God to prove Himself as the God of impossibilities and the family was surprised with this package of quintuplets. And the babies are very healthy, eating well,” the nurse said. She added her voice to appeal for help.

Brown Anyadike, who alerted the press about the incident begged the government, individuals and organizations to send help to the couple at God’s Mercy Maternity Home, Obiuno, Otolo, Nnewi