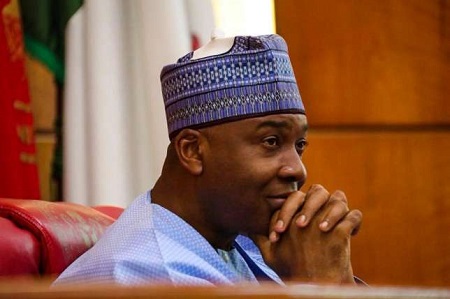 The Senator representing Kwara South Senatorial District in the National Assembly, Rafiu Ibrahim, has said a team of senior legal experts will handle the allegation of complicity in the Offa robbery saga levelled against the President of the Senate, Bukola Saraki, by the police.

The police have insisted that Saraki is needed to make certain clarifications on the statement of the suspects arrested in connection with the robbery despite the legal advice from the office of the Attorney General of the Federation and Minister of Justice, which absolved the Senate President of any complicity in the act.

But Ibrahim, who is among the 14 senators, who defected from the All Progressives Congress on Tuesday, told our correspondent in a telephone interview that Saraki’s lawyers, who are mainly Senior Advocates of Nigeria, were already brainstorming on the case.

The Senator’s clarification appears to be an indication that the Senate President may not honour the police invitation and would rather ask his lawyers to handle the matter.

His declaration came on the heels of the insistence of the Force PRO, Moshood Jimoh, that Saraki still had a case to answer notwithstanding the fact that a team of investigators grilled the Senate President last week in his office.

Ibrahim said, “The Senate President has a very strong legal team of many senior advocates of Nigeria who are already working on the issue. He has a legal issue with the police and he will take the case up legally.”

He explained that the executive arm of government bungled a fresh strategy that was being coordinated by Saraki aimed at reconciling aggrieved federal lawmakers with the APC leadership when the police reportedly barricaded the Senate principal officers’ homes in Abuja.

He said, “As we were strategising on how to convince our members to let us reconsider our stand and shelve our plans to defect, the police brought a letter by 8pm on Monday, asking the Senate President to appear before them by 8am on Tuesday.

“The following day, very early in the morning, the EFCC went to the house of the Deputy Senate President, Ike Ekweremadu, blocked his house and successfully ensured that he did not go out.

“Simultaneously, some policemen were also at the home of the Senate President with a specific instruction to prevent him from leaving his house. Those who could carry out such actions could as well kill the principal officers or bomb their houses.

“My concern at the moment is to ensure that the Senate President is alive. The agents of government are getting desperate just to actualise their plans.”

Ibrahim added, “Their plan was to ensure that the two of them were not available for plenary on Tuesday so that some senators could remove Saraki and Ekweremadu as Senate President and Deputy Senate President, respectively.

“However, God, in his infinite mercies and powers, used some people to disorganise their plans by helping Saraki to preside over plenary on Tuesday. It was God, nothing else.

“We adjourned abruptly on Tuesday because the federal authorities deployed armed policemen who laid siege to the residences of our presiding officers.

“If they can put the SP and the DSP under house arrest, what stopped them from arresting senators on the streets of Abuja and institute frivolous litigation against them?”

The senator added that members’ defection on the floor of the National Assembly chambers would be in phases.”