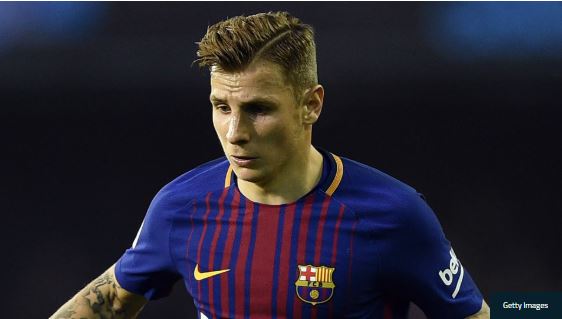 Everton have completed the signing of Lucas Digne from Barcelona for £22m ($29m).

The former Lille, Paris Saint-Germain and Roma left-back has signed a five-year deal with the Toffees, ending his two-year stay at Camp Nou.

Speaking about his move to Goodison Park, Digne told Everton’s official website: “Everton is a big club with a great history. I want to play games, win games and excite the fans with the quality of our football.

“I want to show my best football here and discover the best league in the world. Everybody loves the Premier League. I am loving the fact I am coming here.

“I am not afraid, I am excited. For me, it is a new challenge to discover a country, a league, people and a great club such as Everton. It is fabulous.”

Everton boss Marco Silva has also hailed Digne’s arrival, adding: “It is important to say that he is a player who, from the first moment he was contacted, showed enormous desire to play at Everton.

“He is a high-quality player, aggressive, with good technical ability and in the past five seasons he has played two years at Paris St-Germain, one in Roma and for the past two seasons he has demonstrated his clear quality in Barcelona.

“Lucas is a player who will add competitiveness in a position where we only had Leighton Baines last season and he is accustomed to winning. This is his mentality having captured titles in his career and having these on his résumé.”

After spending the 2015-16 season on loan at Roma, Digne moved to Barcelona in 2016 and made 12 La Liga appearances as the club lifted the Spanish league title last term.

Digne, who was on standby for France’s World Cup-winning squad in the summer, becomes Everton’s second summer signing alongside Richarlison, who joined for £40m ($53m) in July.