Home National News “It was a spirit that told me to go and kill her”...
Facebook
Twitter
WhatsApp 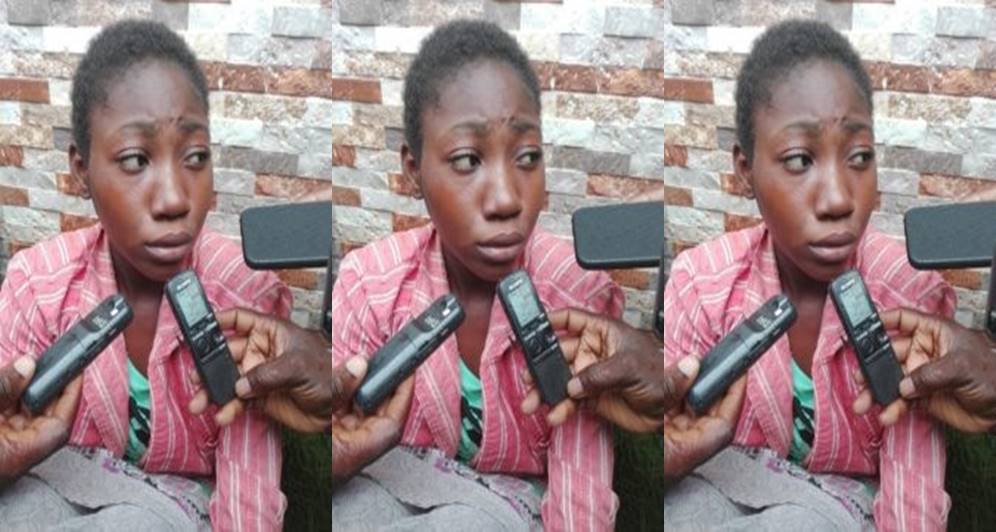 The Edo State Police Command on Friday, paraded a 14-year-old girl, who allegedly killed her septugenarian madam in Benin, Edo State by smashing her head with a stone.

Anna Amos, a secondary school student was arrested by the police on Tuesday, for the murder of 71-year-old Hellen Adodo, whom she had lived with since March, 2018, as a house-maid.

Anna, from Abuja, gave the step-by-step description of how she committed the murder, when she was paraded alongside 101 other criminal suspects arrested by the police.

The teenager who was in tears all thorough the period, narrated how her victim had treated her fairly all the years she lived with her.

She however blamed her dastardly act on influence of unseen voodoo spirit which possessed her.

According to the suspect, in the morning of that fateful day, she boiled water for the deceased to bathe, after which she served her her meal, before she killed her.

“After that?, I packed the dirty plates outside to wash them. As I opened the door and stepped on the varanda, something just came into my body as if possessing me. I no longer know what I was doing and I abandoned the plates? I was supposed to wash. I stood on the stone, and later took it, went inside with it and hit it on her head,” she narrated.
“I do not know what entered my body. It was a spirit. It told me to go and kill her. She did not offend me.” she added.

The deceased was initially reported to have died after her head was smashed with a stone by unknown persons who allegedly sneaked into her residence on Guobadia Street, in Benin, at about 7am. The assailants suposedly blindfolded the teenage suspect before killing the septuagenarian.

When asked why she earlier said some people came into their house, gagged her mouth before smashing the head of the late woman, Anna blamed her dastardly act on influence of unseen voodoo spirit which possessed her.

“The thing that entered into me was controlling me, it told me that if I expose it, it will kill me.”

She later confessed her crime to the son of the deceased, who handed her to the police operatives.

A clip obtained by journalists on Wednesday showed the teenager confessing to the crime in the presence of some residents in the area.

The State Police Public Relations Officer, Mr. Chidi Nwabuzor, had stated that the Command received a distress call over the matter at about 8:30 am.

Nwabuzor also disclosed that the case had been transferred to the State Criminal Investigation and Intelligence Department for further investigation.

Then on investigation, it was revealed today that a girl who was staying with her, named Anna Amos, who came from the North with the help of the daughter of the late woman, was the one that killed the woman.

“Confession was made by this Anna Amos that she actually killed the woman. Anna Amos is 14 years old and by law, she is still a minor. But we will do all we can to see what we can do. We will not rely on the confession of that girl because she might not be the one responsible for the killing of that woman. According to investigation, the woman has been going through a lot of challenges with her health and before her death, she was down with a stroke. Perhaps somebody else did and asked this little girl to own up as the culprit. So, investigation in ongoing. We will try our best to unravel the situation and the report will be made public,” Nwabuzor said.