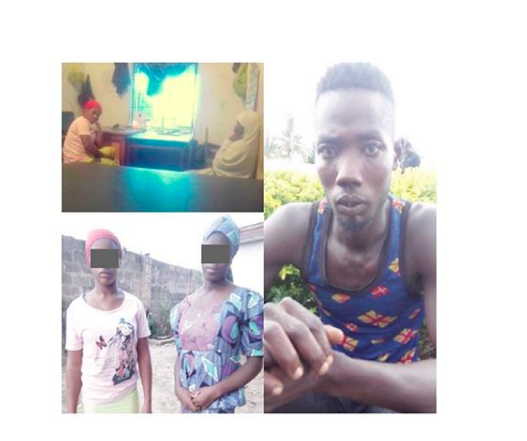 Nigerstate police command has arrested one Shamsudeen Bashiru of Dawaki Angwan Jekada Suleja, for allegedly kidnapping Okwudiri Nwoke and Miracle Nweke, both 16, from Gwada, Niger State, on the 28th of April, 2018.

Independentng reports that Shamsudeen and accomplices moved the girls to Suleja where they forcefully converted them to Islam and prepared them for marriage  by the leader of an Islamic group, Association for the Enhancement of Muslim Welfare, Habib Madaki, at Victory road, Suleja.

Okwudiri and Miracle whose name has been changed to, ‘Khadijat’ regained freedom at about 9pm Sunday night and were handed over to the Igbo community leader in Niger state, Eze Pampas Ngozi Wahiwe on Tuesday evening, (31st July, 2018).

The command’s police public relations officer, Dan-Inna Abubakar, stated that during investigation the suspect admitted to have taken the girls to Suleja on their own accord, saying that it was not an abduction.