A Nigerian man is of the opinion that former US President Barack Obama is responsible for a lot of the problems Nigeria is currently facing.

How did Obama wreck Nigeria?

1. Forcing LGBTQ upon us ergo creating further division and chaos

2. Libya/ISIS and the unchecked weapons that flowed down to an emboldened Boko Haram.

3. Refusing to sell weapons to Nigeria to fight against BH because of “human (LGBTQ) rights”

Of course the official reasons for him blocking the sale of weapons to Nigeria was “human rights violation” by the Nigerian army.

But you and I know it was more of the fallout from the same sex marriage bill during GEJ regime.

Weapon proliferation was on the high under Obama.

Boko Haram became stronger under Obama. And Nigeria’s inability to fend off BH attacks was enabled by Obama.

When people say Obama was an anti-Christ, it is both a metaphor and an understatement.

He was a dark force against anything good. The devil in sheep’s clothing.

The day he dies, there won’t be an RIP from me. Just one less evil gone from the world.

He also went further to say;

You see that law against same sex marriage in Nigeria? A majority of us support it.

And young people like myself will be the politicians of the future. And we will uphold that law by a simple majority.

Call us uneducated, unexposed, ignorant, Bigots, X-phobics or whatever. 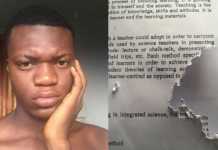