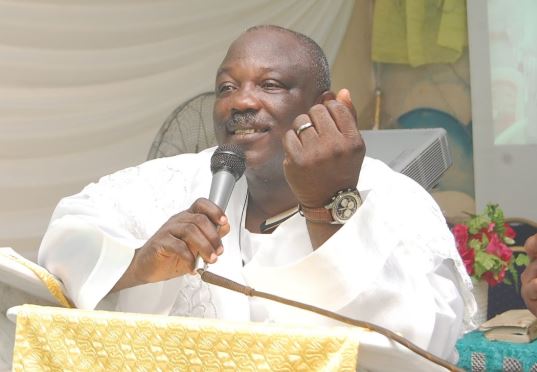 Renowned Prophet of the Lord and Leader of Celestial Church of Christ, Elisha Parish (Worldwide) Prophet (Dr.) MKO Tibetan returned from a six weeks trip to Canada, France, UK and Republic of Ireland two weeks ago.
In a state-of-the-nation encounter with the prophet inside his Lagos-Nigeria office, he gave insights into things to come after the decamping of leader of the Nigerian Senate Dr. Bukola Saraki from the ruling APC (All Progressives Congress) party to the opposition PDP (People’s Democratic Party) last week.
The Prophet who is renowned for his accurate prophecies on national and international issues had predicted on Page 44 of his annual prediction book “Revelation 2018” that ‘THE LORD WILL PASS THROUGH THE NIGERIAN SENATE THIS YEAR’.
The message which was prominently addressed to the Nigerian Senate predicted that God will pass through the Senate before 2019 election. On page 177 of the book, Prophet Tibetan equally gave a strong warning to Dr. Bukola Saraki.
The book which is now been sought after by the high and mighty was launched in Nigeria, London and Republic of Ireland between January and April this year. In this video, Prophet Tibetan revealed more on the imminent fall of Dr. Bukola Saraki by October, 2018.
MKO Tibetan emphatically stated that Saraki will be removed from the seat of power and thrown behind bars.
Watch the video below:
https://www.youtube.com/watch?v=h7TI5vpTsaA
AdvertisementABUJA DOCTOR REVEAL THE UNIQUE WAY TO PERMANENTLY CURE WEAK ERECTION, SMALL AND SHAMEFUL MANHOOD AND INFERTILITY ISSUES WITHOUT SIDE-EFFECTS WITHIN SHORT PERIOD!! DON'T BE A VICTIM!! Click Here for More Details