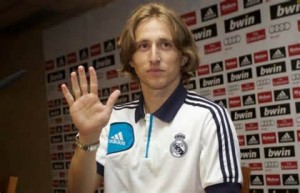 Real Madrid midfielder, Luka Modric, has been nominated for the UEFA player of the year award. He is among the three man shortlist comprising of Christiano Ronaldo and Mohammed Salah gunning for the award this year.

His nomination comes after he had a stellar performance for Real Madrid last season in the champion where they won the title for a record third time. He also won silver at the world cup with Croatia.

Modrid’s is rumoured to be following in the foot step of Cristiano Ronaldo in seeking a move away from Real madrid. He is said to be fancying a new challenge like Ronaldo.

The award winner would be announced on August 30th during the Champions League group stage draw in Monaco.

Do you think he is a worthy winner???