We have no pads for our menstration: imprisonment of 112 women sparks outrage 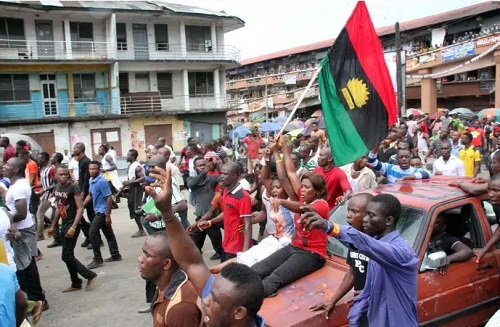 Nigerians have expressed their dissatisfaction over the continued imprisonment of 112 women who were arrested and remanded in prison were charged with reasonable felony.

The offence of the women was  for demanding from government to know where the leader of the Indigenous People of Biafra, Nnamdi Kanu is.

The women currently in detention, have complained about being maltreated, as some say they have no pads for their menstration and sleep on their blood.

However, Imo State Federal Prison authorities have debunked the allegations, saying the IPOB women are being looked after.

The women who were remanded in prison after a Magistrate Court said it didn’t have the power to grant them bail for their charges.

It appears the women may remain in custody until the Attorney-General speaks on the matter.

Nigerians have taken to social media to call the government for the treatment meted out to the women who only protested unarmed.

"We are menstruating on the floor."

"We have no access to diapers or water to clean up."

"We are sleeping with blood and our clothes are filled with blood."

All peaceful protesters must be protected and treated with dignity as citizens exercising their fundamental rights as guaranteed by the constitution of the country.When the constitution is religiously respected,the moral authority of a Government is reinforced.

“Where is Nnamdi Kanu?” is a valid question that requires an answer from the Nigerian government. It doesn’t matter whether you agree with whatever he represents or you don’t. I heard some 112 women were arrested for asking this question. That’s an anomaly in a democracy!

I have just left Owerri prison where I demanded the release of the 112 women detained for several days. We must not become a country where impunity by the authorities is the response to peaceful dissent. Freedom of association and expression should apply to all Nigerians.

112 women have been detained by the Nigerian state in Owerri. Kneeling down for a man shouldn’t be top priority for now. That issue can wait. #FreeOwerri112

Are we going to continue acting like 112 women haven't been arrested & detained in Owerri for 5 days because they went out on a peaceful protest? #FreeOwerri112

A Nigerian Twitter user ignited the wrath of other social media users after saying that late American basketball player, Kobe Bryant and his 13-year-old...
Read more