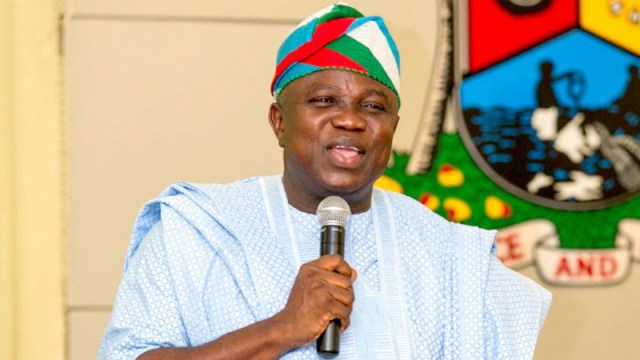 Akinwumi Ambode has stirred a hot debate on social media after his revelations about his ace contender, Jide Sanwoolu.

Ambode revealed during his emergency press conference in Lagos today, that Sanwoolu is mentally unfit and such records are in Gbagada general hospital.
The governor also made it known that Sanwoolu was once arrested in the USA for spending fake dollars in a nightclub.

Sanwoolu, is reportedly the favoured candidate for the All Progressives Congress(APC) lagos state governorship election in 2019, after Ambode lost the support of his political godfathers.
Many Nigerians are talking about the revelations from Ambode’s Sunday press conference.

Ambode says Sanwo was once mad and committed forex fraud. He could literally be describing many current politicians and Twitter people. Doesn't rule out Sanwo Olu by Nigerian Standards…lol

If you haven't read The Prince, this is the time to. If the 'Elites' are against you, it's time to get the 'masses' behind you.

Pull down those toll gate. That's their source of revenue. Cripple it. Go all out against the 'elites' while making the 'masses' happy.

Ambode accused Sanwo-Olu of spending fake dollars in a night club and also insinuated that went to rehab for addiction.

Yet this same Sanwo-Olu served under his Administration as the MD, LSDPC.

Ambode: Sanwo-Olu is not fit and was also caught spending fake dollars

Tinubu boys: Wow. You will hear from us soon. The world will know the truth about you.

Chimaroke was Sullivan’s godfather. Chimaroke put him there but Sullivan was able to win the hearts of the people with his good work and generosity that’s why he was able to fight Chimaroke. What foundation has Ambode laid in Lagos that he thinks he can fight Tinubu.

See, if you people push Ambode too far he will probably open LAGOS’ books and your favorite godfather and everyone else who has ever been involved will go down with him! Every single person!!
Dude is very vindictive!!

And that the opposing striker, Sanwa Olu, is INJURY prone and UNFIT to play the game.