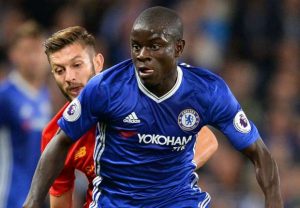 Chelsea powerful midfielder, N’golo Kante, has been singled out after his impressive performance against Bournemouth. Chelsea had to dig deep before getting the opener in the 72nd minute after some lovely play from Pedro.

Both teams had tasted defeat this season prior to the match and the match was kept as tight as possible by both teams until Chelsea was able to open the scoring. And N’Golo Kante was at the heart of everyting the Chelsea team did this evening.

In so doing, they are closely following Liverpool who only sit atop of the League table owing to their superior goal difference. And Chelsea fans are so pleased with Kante’s display as they took their turns to praise him on social media.

Kante is a MUCH better defender. I never said he wasnt but thats not what the dm in sarri'a system requires. Watch some tactical analysis videos of different coaches on youtube and try to watch for it. Sarri's style requires a jorginho type of player with distribution

Did you really watch the match. Didn't see any counter he intercepted. Passing around yes but we need him to start shooting like other good DM in that position. I think Kante can do better defending

@UrbanRadio945 guys please can u name city players that u compare with Kante,hazard.jurginho is as good as any city midfielder for sure.