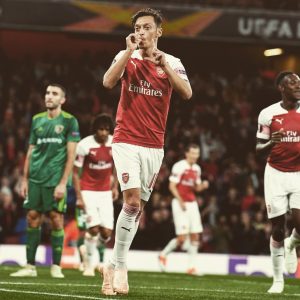 Arsenal’s new coach, Unai Emery, began his European campaign as a Gunners manager with plenty of positivity as his side trashed Vorskla Poltava 4-2. The Spaniard is a master in the competition having led Sevilla to three consecutive titles.

Inspite of this mind blowing result, the gaffer is unhappy with his teams defensive display. He felt so bad about the two late goals that were conceded by his team.

He made this revelation at the end of the match when interviewed by journalists.

“It was disappointing to see the two goals go in because there was progress in the 90 minutes. We want to do better in this minute. When you are 4-0 up you want to continue to be competitive & to score more goals not concede like today”