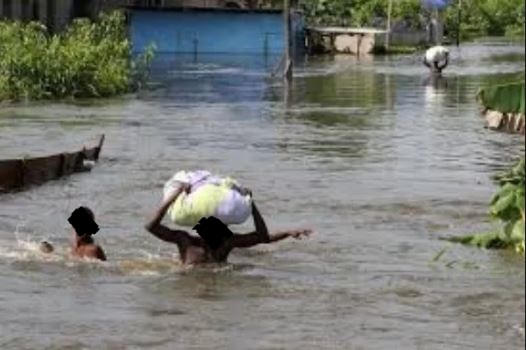 According to SaharaReporters, Chief Ojike Ajanwu, a father of nine children, is the latest victim swept away by flood in Obolo village in Ogwuanicha, Anambra State.
Ajanwu was said to have drowned in his attempt to evacuate his harvested cassava from his farm, on Thursday.
His death brought the number of deaths in the flood to four, Arinze Awogu, Chairman of Ogbaru Local Government Area, told NAN on Friday.
According to Awogu, the wife of the deceased, and her eight children — including a one-month-old baby — were at the Internally Displaced Persons (IDPs) centre in Ogwuaniocha.
He said: “The deceased left behind a young wife, Chinasa, who hails from Ossomala and nine children; the oldest of the children is 13 years old.
“Our hearts go out to the family, and we assure them of government’s support and sincere condolences. We shall inform the governor about the incident. We are still counting the number of deaths but as at it stood at four.”
The council boss noted that the flood has not shown signs of receding, as the 16 communities in the area have been submerged by flood, stating that “It’s a real emergency”.
“None of the 16 communities in Ogbaru is left out; the upland is congested; the IDPs camps are overstretched, so we are now moving them to Ihiala and Onitsha,”he added.
“I do not know the basis for the impression that this flood is receding. For us down here in Ogbaru, we are still at the middle of this emergency, and flood level is still rising.”
He, however, thanked the Anambra State government for its support and urged the National Emergency Management Agency (NEMA) to do more to assist the victims.
Meanwhile, Walsom Ibarakumo, Coordinator of Enugu office of NEMA, said the agency had handed over relief materials to Anambra SEMA for distribution to affected persons.
Items so far handed over to Anambra SEMA were food and non-food items including 600 bags of rice; 300 bags of garri; 600 bags of cement; 200 cartons of Milo; 300 bags of beans; 1,000 cartons of detergent, and 300 cartons of tinned tomato paste.
Others were 2,000 pieces of treated mosquito nets; 1,000 pieces of toilet soap; 1,500 pieces of printed wax; 150 kegs of vegetable oil; 150 bags of salts,;150 bags of sugar and 150 kegs of red oil.