Popular Nigerian comedian, I Go Dye has revealed that he has forgiven Bovi after their recent social media squabble.

I Go Dye who was at loggerheads with Bovi for supporting Uduaghan’s senatorial ambition, has now pledged support for the comedian despite their current disagreement.

Writing on his Instagram Page earlier today, I Go Dye said he has decided to support Bovi’s show ‘Man on Fire’ because entertainment brought them this far. “Regardless of what we have as our style and personality, Entertainment brought us this far; I can’t fail to join many in ushering support for BOVI MAN ON FIRE as he steps out on stage once again. See you there. Amb Francis Agoda.”

In response, I Go Dye while sharing a picture of Bovi and Uduaghan, accused the comedian of being paid and used as a ‘baby lawyer’by the former governor.

After a war of words over the issue, Bovi threatened to beat him up over the alleged accusation. 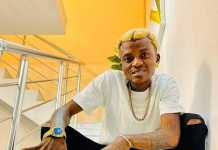