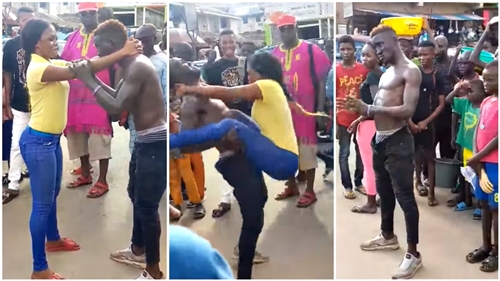 A young Nigerian male dancer has been given the embarrassment of his entire life after he received hot slaps from a female passerby he begged to dance with him.

It was gathered that the lady disclosed that she slapped him because he disrespected and rough handled her.

According to the viral video, the dancer was trying to put on a show on the street and to wow his audience, he needed a female volunteer to help, and ater compelling a female passerby to join, she eventually adhered to his request.

After putting up some sort of a Jamaican rugged dance move, the lady felt really disrespected and rough handled and so she slapped him while passersby looked on and some even laughed.