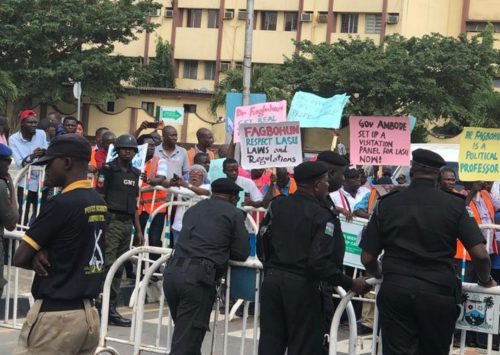 Members of the Academic Staff Union of Universities (ASUU), Lagos State University branch, were at the Lagos State Government house to protest alleged mismanagement and impunity by the Vice Chancellor of the University, Professor Olanrewaju Fagbohun.

The protesters, who chanted union songs, also bore placards inscribed with words such as ‘Dr. Fagbohun is a political professor’; ‘Governor Ambode, set up a visitation panel for LASU now’; ‘Fabgohun respect LASU laws and regulations’, among others.

The protest, however, ended peacefully according to a statement by the Lagos State Rapid Response Squad on Twitter, which read: “Members of the Academic Staff Union of Universities (ASUU) LASU Branch were at the State House to protest. Our men interacted with them, it ended peacefully and they left us their placards and paper signs”.

Fagbohun’s troubles date back to the claim by the institution’s ASUU that his appointment as vice chancellor in 2016 was unmerited.

The ASUU had, among others, alleged that Fagbohun’s professorship was illegally backdated from 2014 to 2007 to enable him to meet the 10 years professorial qualification required for appointment as LASU VC.

However, Fagbohun had said the process leading to his professorship award being back-dated to 2007, started in 2012, at a time he never even dreamt of vying for the office of VC.