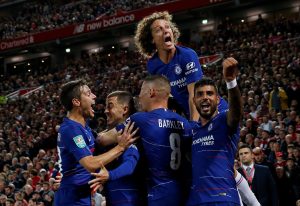 Chelsea succeeded in inflicting the first defeat of the season on Liverpool yesterday in the Carabao cup. The Reds were coasting to victory when Sturridge opened the scoring for them in the 58th minutes.

However, Emerson, who was making his first start for the Blues yesterday  gave them the equalizer before Eden Hazard’s wizardry got them the winner.

As a result of their heroic showing yesterday, their players have been on social media, reacting to this wonderful victory.