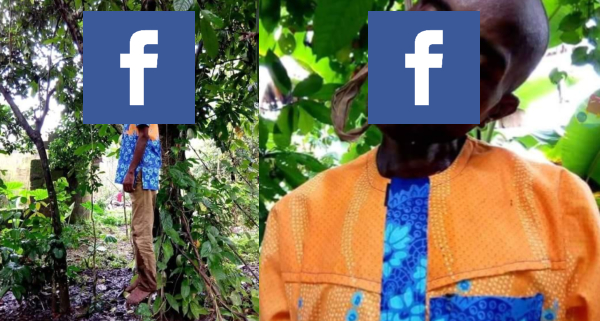 The man whose body was found dangling on a cocoa tree in the early hours of Tuesday, September, 11, 2018, behind his uncle’s house, was reportedly married with kids. Though what pushed him into committing suicide is still not known, however it was gathered that remnants of the SIM card were found in his mouth.

Here are photos below (graphic) 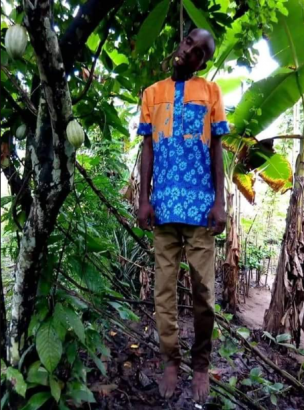 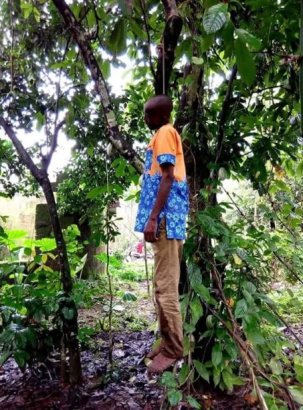 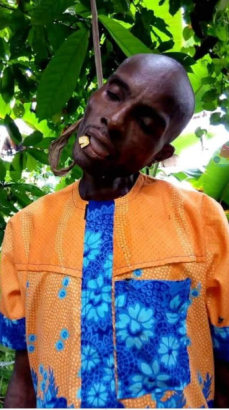 This is coming after it was reported that a 30-year-old man has committed suicide in Abuja, the Federal Capital Territory (FCT). The victim, whose identity couldn’t be ascertained, reportedly hanged himself in a bush around Area Eight in Abuja Municipal Area Council (AMAC).Witnesses told newsmen that he removed his trouser and kept it beside his bag before he worked through the stream and hanged himself on the only standing tree inside the stream. Unconfirmed reports said the deceased, who wore a red shirt and cream trouser, was not with a suicide note and might have committed suicide as a result of frustration and joblessness.

One of the witnesses, Suleiman Tukur, a trader disclosed that it was another trader who went to the bush to defecate that saw his body dangling on the tree.

According to Tukur, “that bush is where we (traders) normally go to defecate. So, one of us went there to make use of it when he saw him dangling from the tree. He was dead already. He now alerted us before we all moved there to confirm the authenticity of the report.

“So, we immediately alerted the police and they came around to remove the corpse and took it to an unknown mortuary.” He added.

When contacted, the Police Public Relations Officer (PPRO), FCT Command, Anjuguri Manza, a Deputy Superintendent of Police (DSP) confirmed the incident, saying neither a suicide note nor an identity card was found on him.