There was panic earlier today in Osun state as policemen embarked on a show of force ahead of the rerun election tomorrow. In a footage posted online, the policemen were seen patrolling the streets Ile-Ife of (Mayfair area) while shooting sporadically in the air as residents took to their heels and hid to avoid being victims of stray bullets. 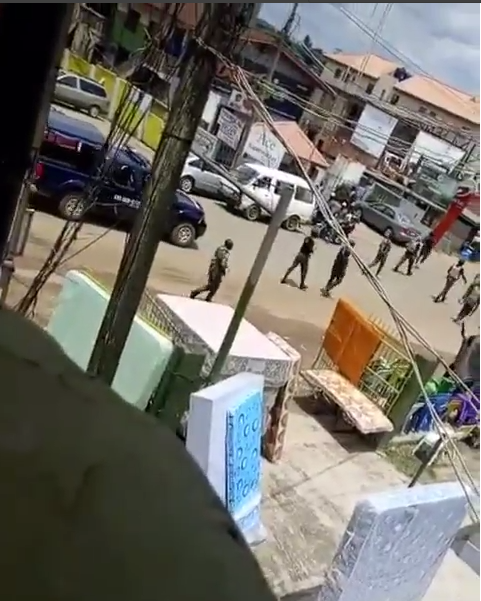 The Returning Officer, Prof. Joseph Fuwape, declared the election inconclusive after the collation of the results from the 30 local government areas showed that the candidate of the People’s Democratic Party, PDP, Senator Ademola Adeleke, scored 254,698; followed by Alhaji Gboyega Oyetola of the All Progressives Congress, APC, who polled 254,345 votes.

INEC felt compelled to declare the poll inconclusive when it discovered that the number of votes cancelled in seven polling units (3,498) was more than the difference between the first and second placed candidates (353). It reached this decision based on INEC Election Guidelines made pursuant to Section 153 of the Electoral Act 2015.

Meanwhile, the governorship candidate of the Social Democratic Party, Senator Iyiola Omisore, has agreed to work for the ruling All Progressives Congress in tomorrow’s rerun election in Osun State.

He said this while addressing journalists at his residence in Ile Ife on Wednesday.

He said, “We have accepted to support the APC for victory in the rerun election tomorrow and thereafter form a coalition government.”